This is What They Mean by Serious Journalism 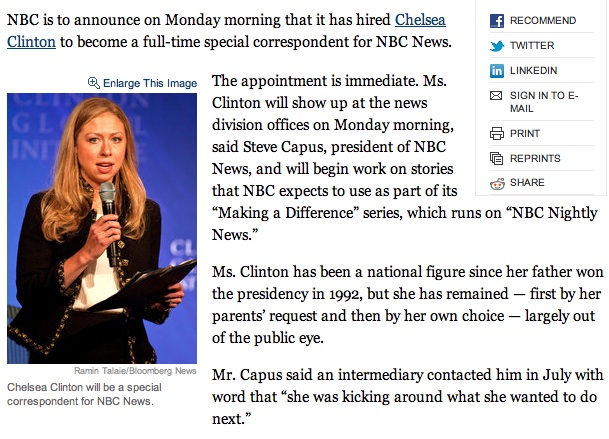 There are more than a few serious conflicts of interest at work here. First of all, former President Clinton is still a part of the international dealmaking scene. He runs around doing all sorts of things that take advantage of his name, globalism, and raising money, not all of which is bad. I think he should be given a position above that of a jobs czar and given some power to get America working again. But Chelsea Clinton's proximity to him creates a conflict of interest. I would think that none of her contributions will touch on what her father does.

Second of all, she is the daughter of the sitting Secretary of State. There are conflicts of interest there that run the gamut from economic policy to foreign policy. Those conflicts of interest are more than evident. I would think that she would avoid anything on that front as well. She should not be allowed to do anything on NBC that promotes what her father or mother are doing in the public arena. That would be unethical.

Third, where on her resume does she have professional experience as a correspondent? Is she really that good? Or are they hiring her for her name?

If so, then those of you who aspire to work in that industry should pray that you have parents connected to our elites. If not, screw you. You're not getting the job.

America is now so blatantly nepotistic that it's a wonder we haven't already collapsed.
on November 14, 2011