This is What Happens When You Chase the Crazy Vote 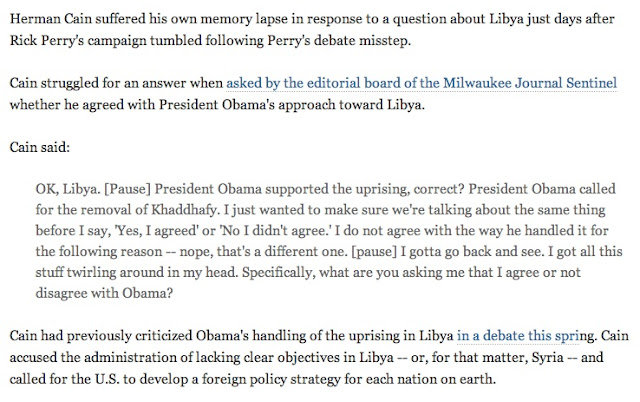 This stage of the campaign is supposed to separate the candidates who can consume vast amounts of information and give the public a coherent message from the pretenders and the charlatans. What we are seeing is that there are serious deficiencies on the Republican side. A misstep or a gaffe is one thing; this is a full-blown collapse of the collective intellect. Herman Cain is a fool in over his head.

In order to win the crazy vote, which is what the Republican primary vote really amounts to, Cain has to always be mindful that if he says anything even remotely complimentary to President Obama he will be screamed at by the howling madmen of the conservative movement. They are unhinged and broken souls, shouting down every reasonable shred of polite discourse. Cain has to struggle to find the answer that will get the crazies to continue loving him. That answer is this:

The President was wrong to hold back because he should have found a way to solve this problem that he created himself without spending one single American dollar. This was all his fault and I would have handled this ten or twenty times better. But that's my secret and I'm not giving it up until after the election.

This would necessitate forgetting that the Libyan problem was created by President Bush's decision to bribe the Libyan dictatorship into abandoning a non-existent nuclear weapons program and it would require acknowledging the fact that the only reason why NATO got involved was because of the vast reserve of sweet crude oil trapped in Libya's collapsing oil extraction infrastructure.

Cain, in other words, would have to present himself as informed, and the Republican Party can't handle informed comment or debate. They see blood red rage, and nothing else. They want red meat served raw, and they want their candidate as crazy as the proverbial shithouse rat.
on November 14, 2011