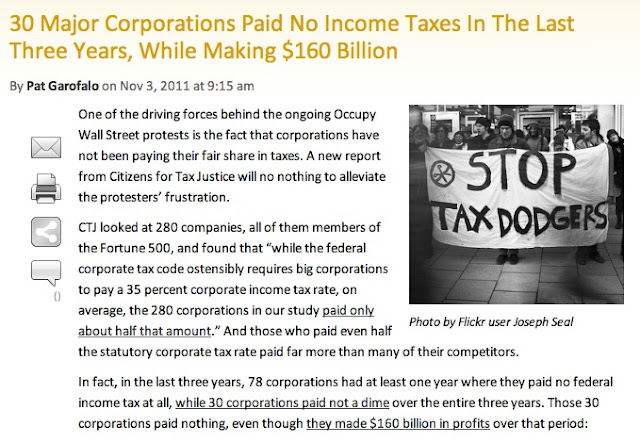 I'm sure that some of these tax cheats are creating jobs. But where? Are they jobs that pay well? Are they exploiting their employees as well? How does Mattel end up not paying taxes on the plastic crap they sell that is made overseas? I don't get that at all.

When tax cuts were sold to the American people, over and over again, they were sold, at least in my lifetime, with the promise and understanding that jobs and wonderful things would "trickle down" to the lowly working masses. Well, the lowly working masses can't find jobs but the multi-billion dollar companies that enjoy a world where they pay no taxes keep finding ways to not hire anybody or pay them a decent wage. That is what is wrong with America right now. The social contract has been shattered and driven over and set on fire and flushed down a gold-plated toilet in the Executive washroom.

Anyway, this is just how distressed our kind gentlefolk are right now. They're being called on their cheating and they just don't like it. Right about now, a bell is going to ring and people are going to start making demands of their government. Will their government listen?
on November 03, 2011