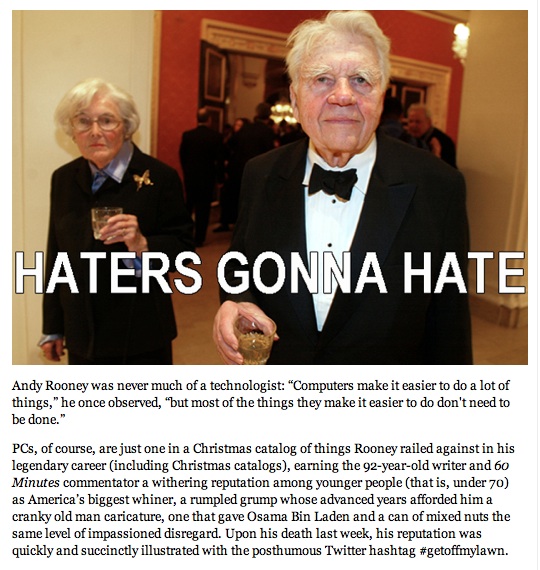 I have held a civil tongue for about as many days as I can handle. In a week, no one will speak of or remember Andy Rooney. The old sorehead worked for thirty years past his own expiration date. Whoever thought it was a good idea to keep him around didn't count on him living into his nineties and working as long as he did. Good riddance to him. His schtick was that of a hater of all things that most people didn't care about. His writing was tired and without inspiration. His persona was that of a small-town grandpa who hates kids and sets things on fire just because no one will stand up to him. And for this, he made a living? Good luck finding that gig now.

The reason why people read or listened to Rooney was for the sheer pleasure of hearing or seeing or reading something that someone should never have bothered to write, say, or do. He was the original Seinfeld. Yes, you observe something and you think you have a point. Great. Now, can we have our Sunday evening back? Thank you very much.

Rooney was, for all intents and purposes, a crank with a mean streak. He didn't like anyone or anything unless it came with a dollar in its hand or something for him to ram down his gullet. He was one of the last remaining links to the post-World War II elitism of modern American journalism. You sons of bitches better get off his lawn. That crazy old drunk has money and a gun, and he always made like he was going to use both to settle some imaginary score with no one who gave a damn about his views on staplers or postcards or money belts. Aye, you should have crossed the street and avoided him. Millions of children will be born in the coming weeks. They will no more know Andy Rooney than they will Arthur Godfrey. That's what Andy Rooney will become. He will become Arthur Godfrey. No one will speak of him, remember him, watch him or read of him. He shall become dust.

If it was inane and useless, Andy Rooney milked it like it was a fat cow squirting liquid gold. Not everyone who survived World War II was part of the Greatest Generation. Some of those old bastards were destined to haunt us for decades, using the glory of the dead as their calling card. Rooney was one of those jackasses. Shamed into admitting that the war was justified, he did what any fool would have done and used it to try and establish his own sense of moral superiority for "having been there." A lot of men came back from that war and appreciated the beauty of life. Rooney pissed on daily life and made money cheapening and belittling every precious thing he could use as material. Had he been an infantryman, he would have appreciated the 92 years he was given. Instead, he used his life to grouse and complain about everything. Finally, the old man shuts up. Finally, we have silence. Finally, we will not have to put up with his whining.

No one will ever make Andy Rooney money doing what Andy Rooney did ever again. No more executive washroom, no more office crammed with books, no more choice piece of broadcasting real estate for you, sir. You're done. And now they can tear down that old eyesore and put in something without any substance, flair, or intellect and replace him just the same. Rooney came with none of those things. He chiseled his way in and stayed there, like the late Don Hewitt's personal piece of dead wood, and stayed there until death took his bloated, screaming carcass away on a donkey covered in bees and motor oil.

Yes, a donkey covered in bees and motor oil. Can I have his gig now? What, this isn't the audition? Damn.