The Lady Does Seem Crazy 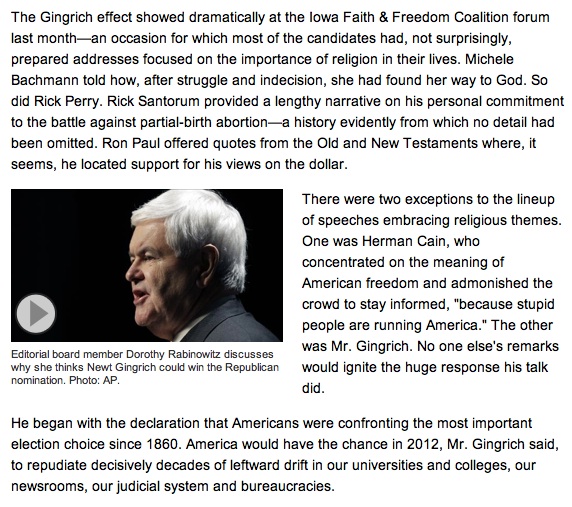 Due largely to the fact that no one running for the Republican nomination for the Presidency seems competent, sane, or popular enough to win, we have these sorts of pieces. Ugh.

This one, by Dorothy Rabinowicz, is one of the crazier ones that I have seen. The pundit/writer/delusional fool usually summarizes the other candidates with cheap put-downs and then settles on the breathlessly brilliant performance of "their" candidate. This is a pro-Newt Gingrich piece.

Rabinowicz argues that he can "win." Well, win what, exactly? The nomination? Never. The Presidency outright? Absolutely not. A bunny? No, Newt Gingrich couldn't even win a bunny at this point.

You see, the man is crazy. And, by extension, so is Rabinowicz. The America they're living in right now is one of their own personal imaginations. It doesn't take into account that Gingrich is a lazy, incompetent campaigner who is beholden to his high-maintenance wife and her expensive tastes. It doesn't take into account that his cheap grasp of American history is a mishmash of nonsense that begins and ends with the Civil War and always, always, always ends up with him being masterfully in charge of the details and with him at the center of being right about why the South should have won so that we could all now be enjoying a stress-free life without race, poverty, or elections.

The America that exists right now is economically troubled and desperate for a fix. Do you really think Gingrich has that fix? He can't even manage his own affairs. He can't keep people working for him. He can't help but screw up his own one car parade. How is he going to fix America's economic problems? Cutting taxes and getting rid of the government? Haven't we tried that for the last thirty years or so?

Conservative economic policies are now dead in the water. Low taxes have brought us economic ruin, unemployment on a massive, permanent scale, and a moneyed elite that is prepared to fight it out from behind their hired personal armies inside of their walled compounds. The Gingrich of 1994 would shit his cheap pants if he could see the state of the country that the Gingrich of 2011 is trying to take under his wing. A decent man would have taken a step back and said, "whoa, we messed all of this up, didn't we?" Well, Gingrich isn't that decent man.

Shall we discuss a charisma gap? Because Newt Gingrich hasn't caught fire with the American people since the brief honeymoon that they enjoyed between the fall of 1994 and the shutdown of the American government. Why? No charisma, no presence, no fire. He's the knowitall technocrat who wants to tinker with the government like a crazy uncle, only this one spouts rehashed history and failed economic theories. Gingrich has been irrelevant when it comes to American politics since being booted out of his job as the Speaker of the House. The most devastating thing you can say about him is that he has never given up trying to fail. He has run various things, tried to hold on to whatever power he once had, and he has failed, utterly, to accomplish much. He has written unreadable books, spoken at length about how intelligent he is, and he has blown the dog whistle again and again. The American people aren't buying what he's selling and they never will.

Rabinowicz is hearing that call, and she, along with a handful of other hopefuls who cannot stomach Mitt Romney or Rick Perry, have begun writing fitful pieces about how they can "win."