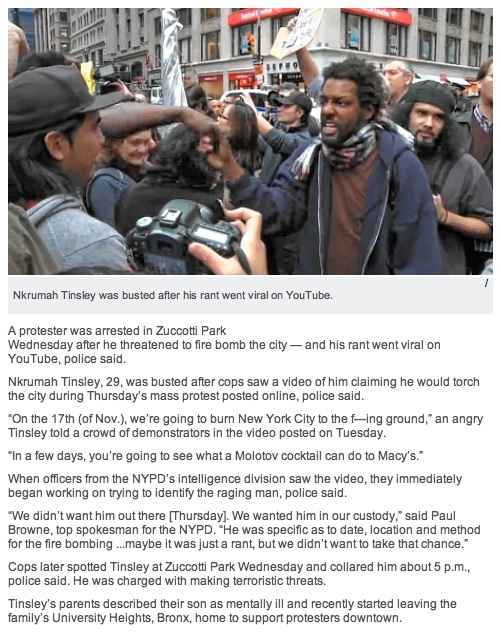 As soon as Nrkumah Tinsley went on his rant about burning New York City to the ground, I dismissed the video as being one of two things. It was either the work of a nut or it was the work of a planted operative and it wasn't worth getting worked up. Why?

Because the Occupy movement has done a lot of things to change the narrative about wealth, poverty, and ethics in this country. It has helped us understand that one of the biggest things it has done is to expose the incompetence of our elites. That is why they are panicked in city halls all over the country. That is why the cops are angry because they're being told to solve the problem without being given a clear idea as to how to solve a problem that America hasn't had to deal with since the early 1970s, and that is, how to deal with mass protests and civil disobedience. This is why a clearly out of touch media personality like Erin Burnett can go out and, with her first few shows on CNN, look like she's been living on another planet.

Nobody gets what is going on except a very well informed and very small group of people who understand that we are living back in the Gilded Age of robber barons and confiscated wealth. Democracy doesn't work without participation; markets don't work without regulation; and capitalism does not work without someone watching what happens with the power to stop what's happening when predators start to run wild.

So, while everyone is screaming about the law, let's put things into perspective. Tinsley is a mentally ill individual, and his terroristic rant should earn him equal parts scorn and denunciation. No one needs to talk like that. He deserves to be arrested and he needs to be treated for his mental illness. But if we're going to apply this concept of the rule of law, we have to remember that what brought him and many others out to the protests was a complete and utter breakdown of the rule of law which allowed predatory capitalism to run wild throughout this country and devastate our economy. We have banks that are stealing homes, investors that are gaming the system, companies that are screwing everyone but their shareholders, politicians who are exempt from insider trading rules, and a media that can't get the story about what's happening straight.

Oh, and we have cops acting like Rent-a-Cops. Can't forget to denounce that.

The solution is to let democracy work. Only through the healthy exercise of free speech and democracy can we let the pressure out of the system and make the will of the people become the law of the land. Of all of the things that our elites are terrified and confused about, the notion that peaceably assembled citizens will gain enough influence to make a hidebound Congressman change his or her vote and make a stunned commentator change his mind and make a cop with a conscience look the other way at an eviction notice from a public place is the thing they fear the most.

Change is coming. And change means the gravy train has come to a shuddering stop for the one percent.