The British Are Still Not Welcome in Iran 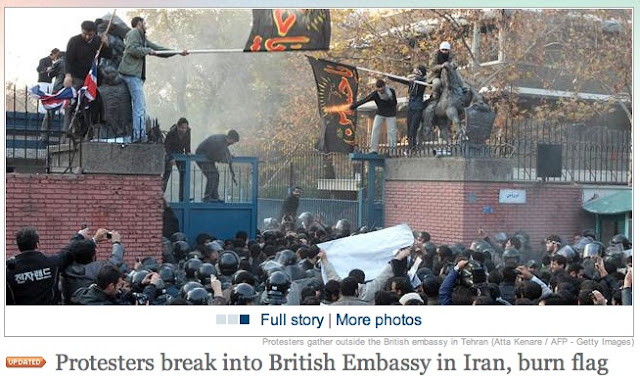 Who is crazy enough to allow themselves to be stationed at an embassy in the capital of Iran? Sure, the diplomatic life is a good one, but Iran has a track record. Here, we see thugs storming the Iranian embassy compound (or one of those compounds) in Tehran. Remember the revolution?

Diplomatic engagement means that countries will exchange ambassadors. The Iranian ambassador in Great Britain enjoys perks and privileges and a way of life his diplomatic brethren probably envy. Getting posted to Mali probably isn't as pleasant, but I'm sure that it was its benefits.

Does this mean that Iran is headed for another revolution? No, Iran is headed for a showdown with the West, and one that happens, the current regime will have a bogeyman bigger than all creation to use in order to hold onto power. A velvet revolution would have been fantastic a couple of years ago. I'm afraid that something like that is probably not going to happen so long as there are enough fools in the West who will legitimize the current Iranian regime by promising to hit them.

Here's a great idea--leave them alone. If, and when, they obtain nuclear weapons, promise the Iranian people that if their government exports or uses such a device, they will face annihilation. Get along with everyone else and we'll trade with you. How hard would that be?
on November 29, 2011