Supporting Bush Means You Are a Patriot? 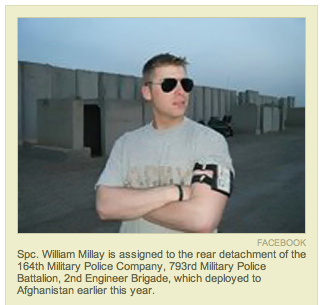 An Army Specialist is facing charges under the Uniform Code of Military Justice for a form of security violation, but what that is hasn't been released as of yet. He appears to be facing some sort of criminal charge based on what has been released to the media. They went as far as arresting him, which is a little surprising because he probably could have been taken into custody by the Army. Instead, they put him in the Anchorage, Alaska criminal confinement system, which I don't understand at all. Was this done because he presented some form of threat?

The issue here might be that it would be his own unit that would either have to arrest or confine him, and so that might explain why he was removed from Fort Richardson and put into a different system. Anyone who has served in the Army knows that one of the things that an MP unit has to do, on an almost regular basis, is arrest and confine its own members.

Millay could very well have had access to sensitive materials, however. As an MP, he may have been granted a clearance that would have allowed him to work as a point-of-entry guard in a secure facility. Without knowing what his duties were, it's difficult to say what he may have done. MPs control access to sensitive areas. The compartmentalization of such information means that he wouldn't have been granted access to information unless he, himself, had a specific duty that allowed him to have that access. Compromising that would certainly have resulted in UCMJ charges. If he really is being charged with some form of espionage, it is probably because he was using his access in an unauthorized way. There's no way to know until the charges come out, but that's my speculation.

Either way, he is innocent until proven guilty. The UCMJ is a completely different form of legal system, so he will have to deal with the consequences of whatever he has done. I hope they find him a good JAG lawyer.

This is the part of the article that made me laugh: 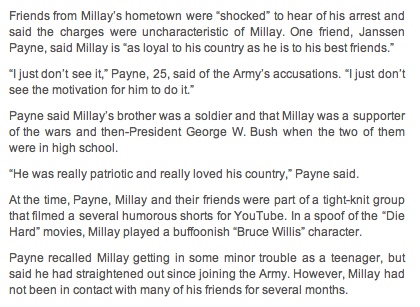 So, being a supporter of President Bush confers patriot status on a person? That's news to me.
on November 02, 2011