Rick Moody Gets it Completely and Utterly Wrong 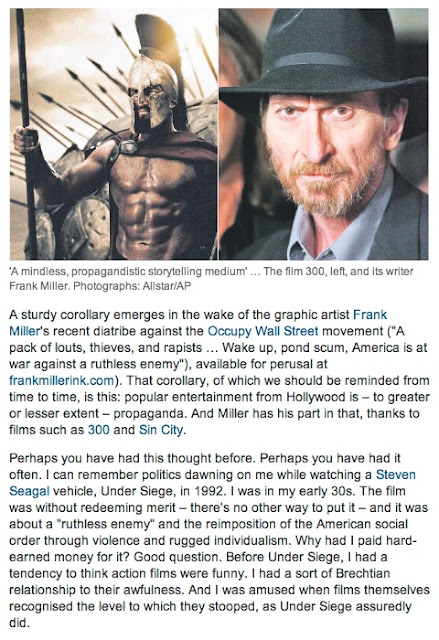 I realize that you should not expect a novelist to "get" what's happening in America, but still. I can't imagine getting it more wrong that Rick Moody. Dealing with his entire diatribe would take weeks. But there are two things worth dealing with here, and then we'll leave it at that. The novel is dead; the practitioners are fools; we live in an age where books aren't real but they sure sell a lot of them as E-books and as abstractions and things like that. Does anyone still read?

Frank Miller can say or write whatever he wants. I don't agree with anything he says about Occupy Wall Street, but he has a right to say what he wants to say. He has a right to enter the discussion and then let the marketplace accept or reject his ideas. Occupy Wall Street is about a lot of things, but one of the things it is really all about is allowing a debate over the future of this country happen in the open and without the media filter and the poison of money in American politics clouding everything. The One Percent control the media apparatus, and that same media apparatus is dishonestly trying to paint Miller as a crank or as a fraud. He makes art, he puts ideas out there, and he says what he wants to say. He is very much a victim of the machinations of a system that will either crush or exalt whatever he does for reasons of profit and nothing else. Once Miller runs afoul of the same system keeping the 99% under the boot heel of a firmly entrenched establishment that wants to maintain the status quo, Miller will probably have a change of heart.

You see, Miller is an artist. Artists challenge the status quo. He'll wake up one day and he'll get it. If not, oh well. But he has every bit as much of a right to be the old man yelling at the hippies to get off his lawn as the hippies have when they're beating the drums and protesting the death of the American dream. If Miller thinks there isn't a war on the American dream right now, then he's less informed than he lets on.

So, Moody gets that wrong up front. No one wants to censor Miller for saying what he has said. The marketplace of ideas will either accept it or reject it and it has nothing to do with an inherent "mindset" of Hollywood. Hollywood is about making deals and money; nothing else. I cannot figure out why Moody just cannot conceive of a marketplace of American ideas. Americans don't do propaganda; Americans do profits. And if propaganda leads to profits, so be it. But when propaganda doesn't sell, Americans will shift to telling the truth or escaping into fantasy or look for a rogue cop with a heart of gold to sell sugar water and bullshit. All of it, coming soon to a theater near y'all.

The second thing Moody gets wrong is the entire plot and reason for the film Under Siege. Conceived as a vehicle for an action star, the movie has almost no political bent to it whatsoever. The presence of an actual President was designed to pay homage to the fiftieth anniversary of Pearl Harbor in 1991 and to a fading symbol of American military history, the vaunted battleship Missouri. Bush's presence as a fatherly Presidential figure was popular in American films in the late 1980s and early 1990s; see the Tom Clancy films of that era as well. This was not so much an embrace of Reaganism or the Bush I Administration as it was a lingering bitch about Jimmy Carter. This was a mindset that survived the times and manifested itself when Clinton became President and it wasn't so much about politics as it was about how the popular culture viewed American political history.

Under Siege had some of this undercurrent in it, but the story itself becomes a race against time to stop the bad guys from stealing nuclear missiles. It becomes a story about greed and it becomes a story about a hero who has to fight terrorists; it was probably pitched as "Die Hard on a Battleship" and that's how it got made. I mean, Gary Busey? The bad guy? Martial arts, Tommy Lee Jones stealing scenes, and some good, old-fashioned ass kicking?

Overtly political films don't sell in America. But there are definitely successful films that have some sort of cultural reference or point of view that can touch on politics without being too in-your-face about it. And so, what Moody doesn't get is that Hollywood, and figures like Frank Miller, know that they won't be able to sell bullshit if it comes wrapped in a political diatribe. Films must entertain and appeal to broad audiences. If they don't, that's the end of your career.
on November 25, 2011