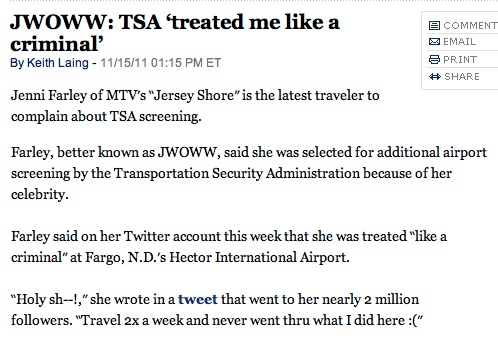 I think it is entirely possible that Miss Farley was pulled out of the line and treated like a "hottie" and given special attention because that is how they do things at that particular airport. That may or may not be the case. Either way, I think she has a great point. She is a frequent traveler and this "stood out" to her as strange behavior.

Now, her clothing could have been a factor here. The thing is, it's practically winter, she was in North Dakota, and I doubt she was in her usual state of undress. Which is fine--she is entitled to make a living. But clothing should not warrant an invasion of privacy unless that clothing signals a threat. The only thing Miss Farley threatens is to show a little too much cleavage and I don't know where you'd hide explosives on her body. I mean, well, okay. I've said too much.

We have not adequately professionalized the position of TSA screener. This should be a job where the pay is outstanding, the benefits amazing, and the requirements to hold the position very strict. We should have people fighting to get these jobs and we should hold them to rigorous standards. That would solve a lot of these problems. But, until that happens, there are going to be more stories like this.
on November 15, 2011