General Peter Fuller Tells the Truth and Loses His Job 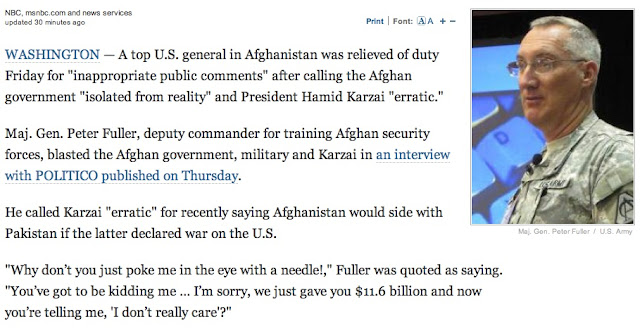 I realize that General Fuller lost his job--and his career--for saying something that he shouldn't have said. It doesn't matter if every single American official feels the same way that he feels--he should not have said what he said.

If the American people knew just how "erratic" Hamid Karzai really is, we'd have millions on the streets calling for an American withdrawal from Afghanistan. Propping up his corrupt government is not our sole reason for being in Afghanistan--regional balance is a larger part of it--but it is the weakest part of our mission. There is no supporting a government as inept as the Afghan government. There is simply no reason to look at Fuller's statements to the media as anything other than exactly what virtually every single knowledgeable American official has said and thought privately since the day they wheeled Karzai out and named him king of the Afghans.

But the reality is, there is no comparison to the situation with General Stanley McChrystal. General Fuller was essentially part of the leadership staff and team in Afghanistan. A two-star general is not insignificant, but this is not a situation comparable to McChrystal. Fuller's remarks were impolitic, not irresponsible.
on November 04, 2011