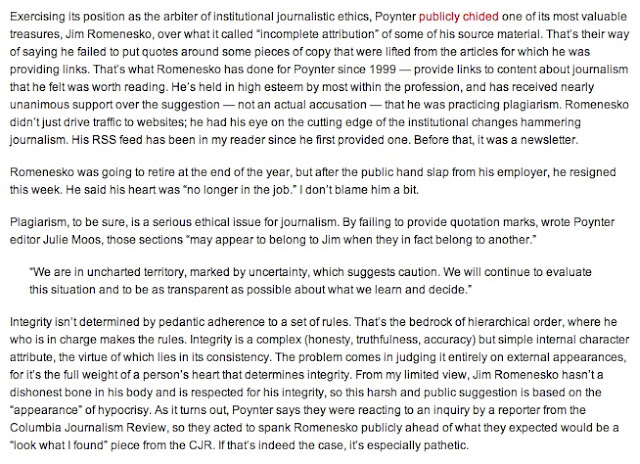 So-called "elite" journalism takes another hit. Instead of celebrating the work of Jim Romanesko, the Poynter Institute crapped all over him and now they're being roasted alive for it. So much for the careful hand of experienced management. Everyone loves a purity troll, especially one with a penchant for scolding the hired help.

The science and practice of journalism is dying so quickly that I cannot imagine what will happen when someone finally realizes that no one can make a living practicing it in any form below that of an elite writer or broadcaster with a six-figure contract. Twenty years ago, I had to make a choice--stick with radio broadcasting and journalistic endeavors or find a way to make a living. I chose the latter, and I have never regretted my decision. A journalism degree is worth what now? How would you like to be a 22 year-old kid, leaving college with a journalism degree and eighty thousand dollars of student loan debt?

The Jill Geislers of the world are killing what is left of what used to be the decent practice of journalism. A lot of people are leaving the Poynter Institute off of their blogrolls and feeds. Why were they there in the first place? Because of what Mr. Romanesko was providing, which was a valuable aggregation service that was conducted from an expert point of view. You cannot just create ten or more years of providing that service out of thin air. Romansesko survived multiple evolutions of the Internet and how we gather information. I'm sure that the site will survive in some way, but not without taking some form of a hit.

This is yet another example of how our elites fail to see what is of value to a marketplace that is filled with people who are more informed than ever and more discerning than previously predicted. Blast away, elites. See what's left when you're done "managing."
on November 13, 2011