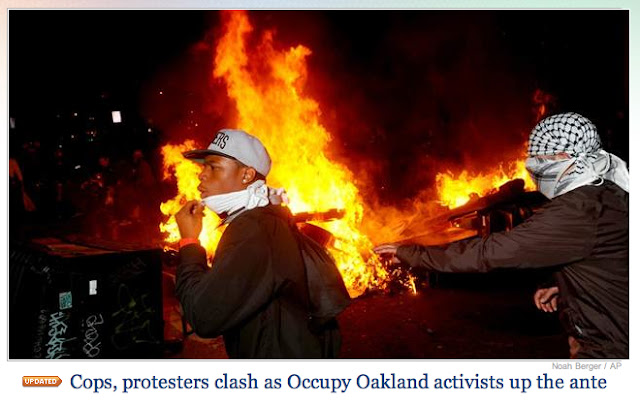 Congratulations, Oakland. Whether anyone wants to admit it or not, the argument is now over.

The Man wins, the Occupy movement loses. The war ain't over, but this battle should be called on account of stupid.

Does it matter what this image really represents? No, because this singularly devastating image--shot with honest integrity or not--destroys the notion that the "occupy" movement in Oakland is peaceful.

You have an African-American male (and our media knows how to produce these images, right?) pulling down his face mask while someone else stays covered up behind him. They are running from the right to the left (hilarious) and they are passing a scene of flames and destruction (private property, meet the Silent Majority all over again). This kind of balls-out violence is exactly what the media wants to put out there so that the American people can make up their mind about all of this.

Who allowed this to happen? Do the organizers have any control? Masks are a no-go. Violence of any kind, also a no-go. Bottles, fire, lawlessness and carrying on like this undermine the movement. Does it matter if these two infiltrated the peaceful protest? Yes, because someone should have been ready for this. Someone should have explained, early on, that any violence, any use of fire or chemicals, and the wearing of masks would not be allowed or tolerated.

The media now command the stage. The argument is now lost. They can now say, without irony, what this means. Why, we need MORE police brutality now, not less. This is a scene right out of the West Bank. This is a scene out of lawlessness and chaos, of fear and terror and African-American males running amok. All of the racist tendencies are here, right down to the earring in that guys ear and the fear that he's on his way over after the riots to take your daughter to the mall, white America. What a goddamned shame.

It just doesn't matter once this sort of thing is unveiled. It hands the people who want to discredit the Occupy movement more than enough ammunition to change the direction of the argument. It changes the scope of what is being protested. Are the people upset about financial corruption and instruments of financial mass destruction or are they just wantin' a riot to come home to?

As soon as I saw this, I knew the whole thing was finished. I hope I'm wrong, but the media doesn't pass up a chance to do this sort of thing, not ever.

Speak of the devil: 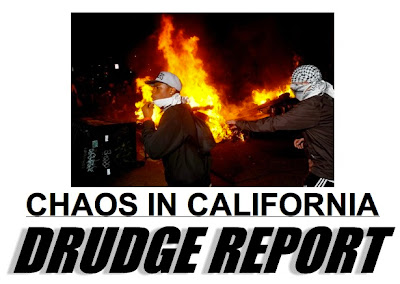