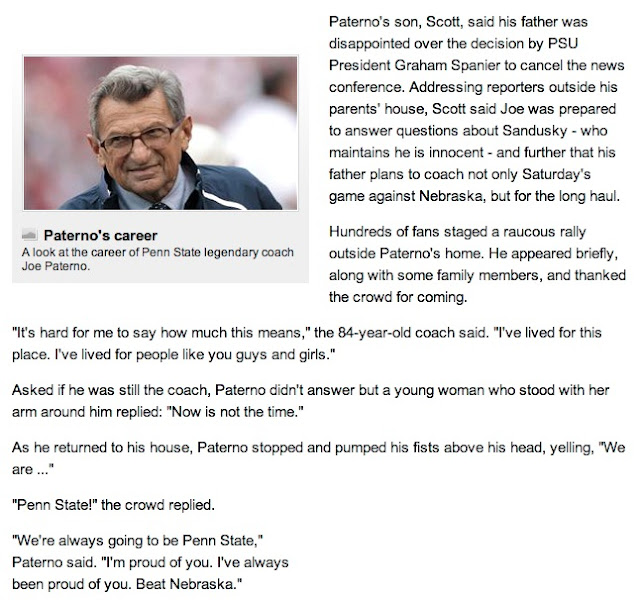 Scott Paterno is as crazy as his father is feeble and confused. There is no way Penn State can allow this to happen. The crazy train has to be stopped. Someone needs to step in and deliver the coup de grace. The end of Joe Paterno's career cannot come fast enough. The decade or so since he learned that his own guy was raping children in the Penn State locker room shower and did nothing about it has been a tragic lie and a farce. Legacy? Record? Meaningless now. Absolutely meaningless.

These are people who are heavily in denial and cannot see past their craven love of college football. When your perspective is as warped as this--when the only thing you can say when you come out of your house to acknowledge the misguided efforts of a few hundred morally bankrupt individuals is "beat Nebraska"-- then the final, merciful blow cannot come soon enough. What happens over the next few days will decide the fate of Penn State University. Is it about football? Or is it about decency?

I'd be willing to bet that there isn't an ounce of decency left in the Paterno family. How is it that no one has noticed that the old man is a figurehead?
on November 09, 2011