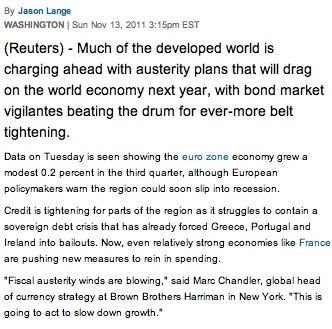 The only thing that "austerity" does for the world economy is "more of the same." We need to encourage spending in order to kickstart growth and get people working again. The same is true no matter where you live--if your government is paralyzed with austerity programs, you won't see any growth. If people are incentivized to risk and spend money and enter into agreements that are based on getting positive economic behavior to flourish, then we might have a chance.

Irrational, wasteful spending is the problem. There used to be a thing called good government. You know, where the government actually does what it is supposed to do in order to right the ship and get people working again. But what is irrational and wasteful to some legislators is actually corruption, fraud, and unnecessary military spending in the eyes of others, and they aim to keep it that way. Our global governing elites love spending money. The problem is, they're spending money to enrich themselves, their clientele, and they're doing it by stealing everything that isn't nailed down.

Crony capitalism begets revolution in three, two, one...
on November 13, 2011