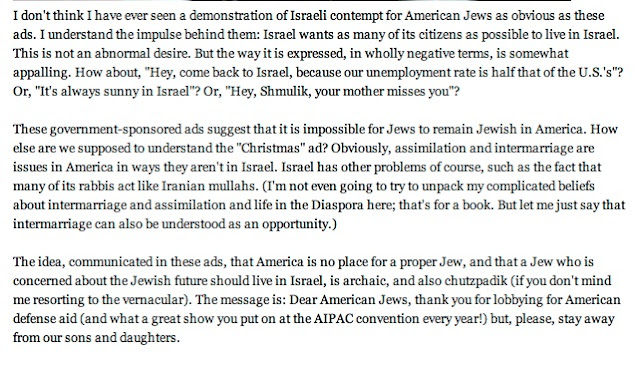 In the Atlantic, Jeffery Goldberg has a firm handle on what is happening inside of Israeli society. Israel's current government does not think too highly of Americans. Goldberg unleashes a torrent of anger at the ads that are embedded on his site; I urge you to read the whole article and, if you like, take a gander at the ads.

This thinking has hurt American foreign policy for my entire lifetime. Of course, we should guarantee the survival of Israel. But, shouldn't a thinking person conclude that Israel's possession of nuclear weapons (over 150? who really knows?) is the fact that guarantees it will survive any attack?

We now have yet another example of Israel's firm rejection of American culture. When will we begin to separate our own foreign policy from Israel's and start the process of treating Israel like any other nation/state that has similar goals? Our goals are similar, but our methods are vastly different. Something about the way Americans do things has caused Israelis to conclude that they should not intermarry with us. Are they any groups in America who would dare suggest that intermarrying with Israelis would be a bad thing? They'd be drowned out in denunciations if so. And rightly so. Marry whomever you wish; that's the way a free society should operate.