Will This Agent Face a Ban for This Sort of Thing? 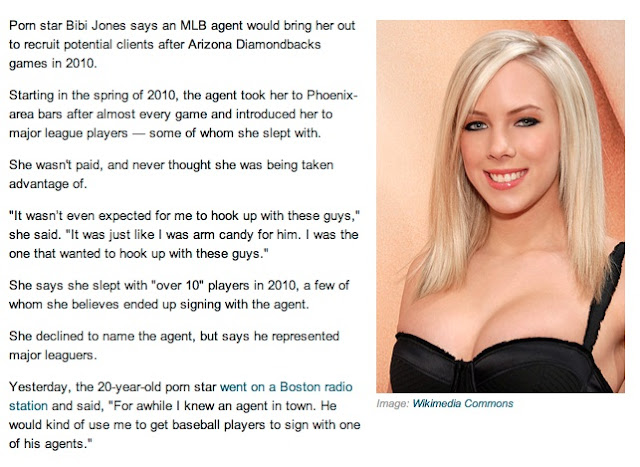 I would think that there would have to be some evidence that money changed hands or that a particular business decision happened because of what Jones is alleging.

And the key word here is "alleged." Is this a revenge play? Is this something that has been made up or distorted? The players who engaged in these hookups are now going to be tainted because of their business dealings. Did they think that they could get away with this sort of thing in the present day? Don't they understand that everyone has to make a buck, and this might be the way that Jones wants to go with her career? I don't believe in discrediting her because of her line of work. I think that her motivation for revealing this information is where the story begins. Why come out with this now?

Major League Baseball should probably look into this and do something. It's too bad baseball doesn't have a real commissioner right now. If someone waves enough money under Bud Selig's nose, this will go away.
on October 27, 2011
Email ThisBlogThis!Share to TwitterShare to FacebookShare to Pinterest
Labels: Baseball, Commentary, Editorial, Major League Baseball, MLB, Money, News, Opinion, Scandal, Social Media, Sports