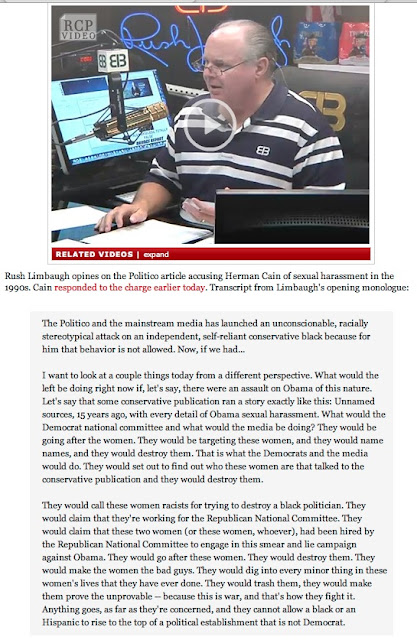 This is what happens when you continuously inject race into the national debate. You end up with phony cries of racism from people who have said racist things over and over again in order to enrage people on purpose. This may very well be the most racially charged election in our history, specifically because there's no chance whatsoever that economic and social issues will be heard. Our elites couldn't handle that discussion.

Rush Limbaugh has been blowing that dog whistle for as long as he's been trying to market and sell himself as a conservative in modern America. He knows that his long, sordid past of saying racially charged and insensitive things will cause people to focus on that aspect of his past rather than on the one thing that matters here and that is the fact that Herman Cain is finished.

This is not being done because Cain has a chance to win. What he does have is the ability to raise a lot of money that won't go to Mitt Romney. That's the misdirection at work here. None of the people who are raising claims of racism actually care about Cain and none of them have the ability to call anyone racist when they, themselves, inject race into the national debate in order to change the subject from justice, inequality, and the collapse of our rational, thinking media.

This stage of the Republican race for the nomination is all about establishing an organization, raising money, and not appearing too crazy. Many of the candidates are failing this test, and Cain has been one of the few threats to move from B-list to A-list and end up on the receiving end of a massive infusion of cash from the people who fear a Mitt Romney campaign in 2012.

If there was an assault on President Obama right now over whether he settled two sexual harassment claims, I think that most people would chalk it up to the racist tendencies of people like Limbaugh. It would be an assault with the usual sinister undertones--black man, white woman, sex, and the collapse of the American way would follow close behind them, leering about the jackhammer sex acts and the natural fear of the Republican, which is whether or not anyone is having enjoyable sex anywhere with the lights on.

When you end up having to pay to get your way out from under such claims, you end up with a paper trail. If there's anything to this story, it is going to be revealed when the relevant documents come out. Then, and only then, can Cain claim to be a victim, should it come out that he didn't do anything wrong.
on November 01, 2011