Senator Mark Rubio is Not a Cuban Exile 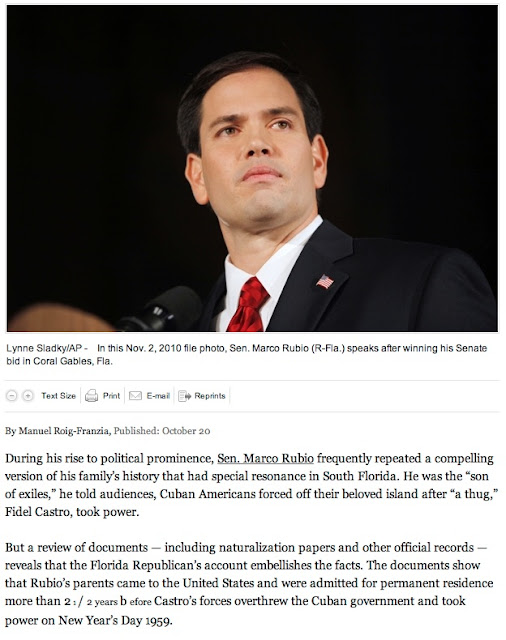 The Rubio family left Cuba before Fidel Castro came back to Cuba in November of 1956 to begin his armed revolution against the Batista government? That's an incredible revelation and it means, in essence, that Rubio is not the son of exiles.

I think the definition is fairly clear--you can call yourself a Cuban exile if you actually fled the Castro government. Rubio's parents left before there was even a hint of a Castro takeover. The Batista government released Castro and his followers from prison because they weren't considered a serious threat after their first failed attempt to overthrow the government. No matter how anyone wants to slice it, to have left Cuba in 1956 meant that the Rubio family was fleeing for economic reasons or from the Batista regime, not from the Castro regime. I cannot believe that this distinction is not a significant one for anyone versed in the details of the Cuban Revolution.

I suppose people will rewrite this history and try to save Rubio's reputation. That's too bad. They should abandon this liar now.
on October 21, 2011
Email ThisBlogThis!Share to TwitterShare to FacebookShare to Pinterest
Labels: American History, Commentary, Editorial, History, Lying, Opinion, Politics, Republican