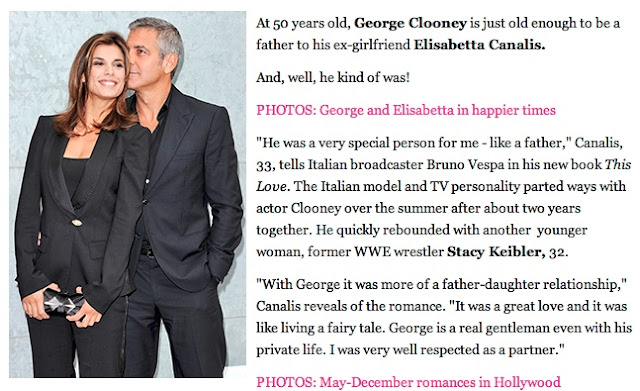 Aside from the weirdness of it all, let's skip past the thing about fathers and daughters and get to the right word.

I think the word Canalis would have been better off choosing would have been "paternalistic." For her to suggest that it was like "living a fairy tale" means that she didn't have a real adult relationship with Clooney and that she didn't really have any responsibilities in the relationship. A paternalistic relationship  basically allows one person control while the other person exists without any rights or responsibilities. When you think about it, Canalis was probably in a relationship where she just went along for the ride.

Culturally, this is maybe more of a European kind of relationship than anything else. I'm speculating, but it doesn't sound like it was anything more than a fling based on mutual physical attraction and based entirely on a money-driven lifestyle. It's impossible to say for certain, but why is anyone impressed or intimidated by George Clooney? He's an old man living like a college boy. A great body of acting work, sure. But is he someone to emulate? To admire? Or is he a cautionary tale about never growing up?

Now, is that healthy? No, in the long term, that's not healthy for anyone. So, you have to give her credit for trying to explain what it was like. The problem is, she might have been a bit too forthcoming.
on October 30, 2011
Email ThisBlogThis!Share to TwitterShare to FacebookShare to Pinterest
Labels: Celebrities, Celebrity, Commentary, Culture, Editorial, Entertainment, Money, News, Opinion, Privacy, Relationships, Stars