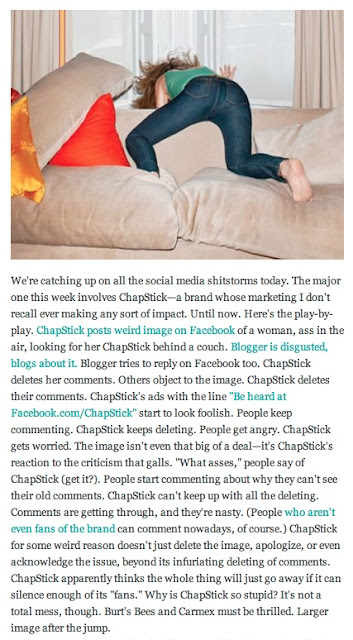 I don't think this will cause users of Chapstick to abandon the product. I think, instead, it shows that advertising really does impact people who like to get offended.

There is a sexist element to this ad, but I don't think it's as offensive as it is being made out to be. It's a comedic scene, and on one level, it is exaggerated enough to be funny. The model being depicted here is clearly dressed in a way that makes her look attractive, but it's not like she has an oversized rear end or something sticking out or a gratuitous shot of butt crack. She's being exploited in a hapless, amusing way, digging into the cushions. Her rear end attracts the fixation because that's where some people's minds will go. I look at it and I consider the situation; not that there's anything wrong with looking at her business, of course. How does this sell Chapstick? I can't figure that part out.

You have to make this more egalitarian and show a dude or a kid or a friend in there trying to help. A dog digging into the cushions would have helped mitigate the charges of sexism, but I could be entirely wrong about that. People love to get offended.

As a piece of advertising, the message is confusing, and I think that's why so many people got upset. The ad has been pulled, and Chapstick's poor handling of the reaction to the ad is probably the bigger part of the story. Deleting the blogger's comments was like throwing a jelly jar full of gas into the flaming jaws of social media oblivion.
on October 28, 2011