Here's Where it Gets All Meta 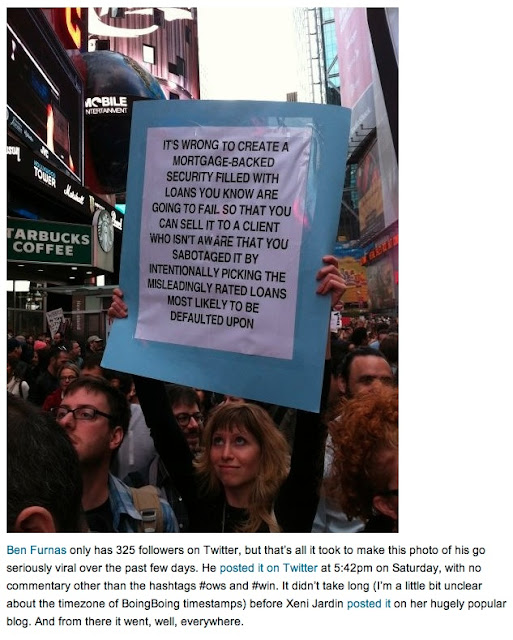 Felix Salmon looks at how this image went viral, and he gets into the reasons why the expression of such a complex idea has succeeded in boosting the legitimacy of the Occupy Wall Street movement.

What's under attack right now is legitimacy. There are no deep thinkers working for Andrew Breitbart, but Memeorandum is full of their posts right now. His organization is using code words like rape and violence to attack the legitimacy of the first real popular uprising in America since the Vietnam War. I can think of only a handful of other movements--the efforts of family farmers in the 1980s to hang on to their legacy and the quick flameout of the H. Ross Perot movement in the 1990s--that came close to approximating what we're seeing now. Breitbart's minions are going to pounce on anything that looks Marxist, sexist, or ridiculous.

The image that you see above operates on an intellectual plane so high above their paygrade that what they really ought to be doing is building a series of walled compounds so that they can protect dear Andrew from the unwashed masses. Breitbart once famously told people that "we have guns." I hope that gives him comfort because there is no one who really has his back. The people in the uniformed military that he claims will use force to support what he's doing command people who understand where they fall in the economic spectrum, and they are the members of the 99% who count themselves lucky to be in uniform. They understand what a lawful order is, and they're not going to turn their weapons on American citizens. I'm sorry, but it ain't happening.

The real danger is that this will flame out. Since this movement requires people to place themselves in both physical and economic jeopardy, I think that the influx of financial support has really helped ward off the collapse of the movement. People need to be fed and given some basic amenities while they're in the streets, and that appears to be happening. Those who can't make it to Manhattan are creating movements wherever they live. Occupy Miami might have to keep things rocking and rolling so that Occupy Chicago can survive the winter.

It sort of reminds me of the controversy over holding the Super Bowl in a cold-weather open stadium--will it create a sense of magic if the game is played in snow or will it lead to lawsuits once the drunks start showing signs of frostbite? People are prepared to endure misery to make their point. This is the peace movement we should have had eight years ago. If this thing survives the winter, it will be the second coming of Valley Forge. Wear a turtleneck and drink something warm, whether you're going to the game or to Occupy International Falls.

Using financial instruments of mass destruction, too much wealth has been concentrated in the hands of too few. This is the beginning of that correction, and the ideas being expressed are far more subtle and brilliant for the traditional practices of paid shills to counter. People may not understand what's going on in that sign, but they damned sure understand what a robber baron is and they do know how that phase of American history turned out.