Clear Channel Moves to Destroy the Radio Industry Some More 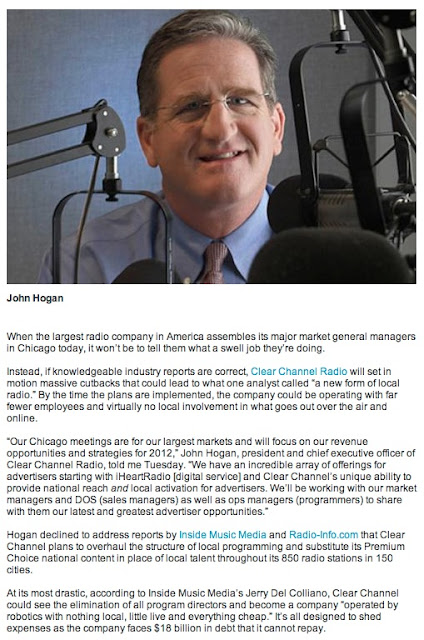 Two of the stupidest things that I ever did in my life were:


I finished the first one, walked away from the second one, and ended my broadcasting "career" in the early 1990s. Simply put, there was no way that I was going to be able to make a living at it. I was not talented enough at that early age to find full-time employment, and I failed to establish myself early on. I tried it for about four or five years, on and off, and it was a debacle. Yes, I've done many a stupid thing. Those two things were really, really stupid and I regret them every day. Well, no. I just thought about it today for the first time in ages. Life has a way of moving on.

This has left me with mixed emotions about the broadcasting industry. This industry doesn't really exist anymore. Everything is automated, everything is garbage, and people don't know that they're listening to a very pale imitation of what it was. The days of having a radio station where people actually worked and did the actual broadcasting are over. Now, a radio station is an office or a closet with someone who keeps the automated signal running and with someone who will sell the ads, make a small commission, and then move up in the world to selling used cars or something like that.

It used to be, you had a sales staff, a news staff, a sports staff, a broadcasting staff, and a support staff of people in just one radio station. Thirty or forty people would work at a radio station in the old days, and that was just the full-time personnel. There are a few places like that, but that's mostly gone now.

One of the things that helped kill radio was the belief that consolidating radio stations, automating them, and using them as turnkey businesses would keep the industry afloat. All it did was drive out thousands of people and ruin the medium of radio broadcasting. Satellite radio has hurt it, but it didn't kill it. The Internet probably could kill it, but who knows. But radio was killed by the mentality of Clear Channel, and that's all I have to say about that.
on October 27, 2011