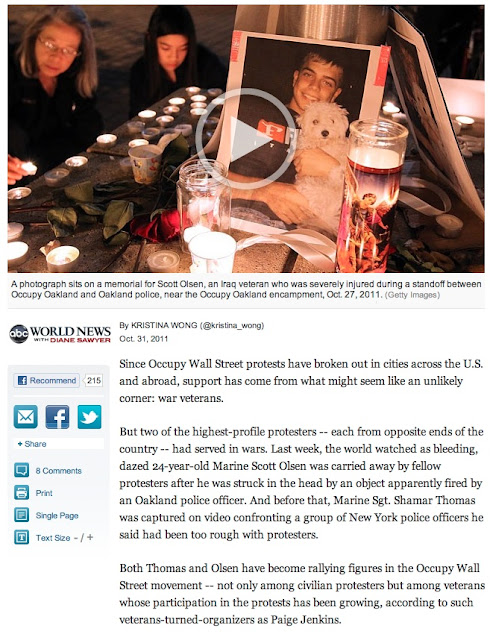 A motivated, united Veterans organization, based on the principles of Occupy Wall Street and on protesting the destruction of the social safety net could be a powerful one. It could actually a sleeping giant, ready to advocate on behalf of the increasing numbers of homeless, disaffected, and abandoned Veterans. But the numbers don't lie--there aren't enough Veterans to really make much of a dent. A lot of men and women have served in over the last ten years. Many of them are scarred for life and are being abandoned every single day by the services they were in and the Veteran's Administration.

I don't think there's any fear in offending or marginalizing the Vets of George W. Bush's wars of conquest and folly. Once these "ingrates" who wore the uniform realize just what the Republican Party wants to do to their fragile system of benefits, the outrage should be sufficient to get the ball rolling. The problem is, there are just enough Vets who are aligned with organizations that take their marching orders from the Republican Party. The movement, should it ever really get rolling, faces the paid shills who know they have to fragment and destroy the credibility of any popular uprising of Veterans.