Why All of the Krugman Bashing? 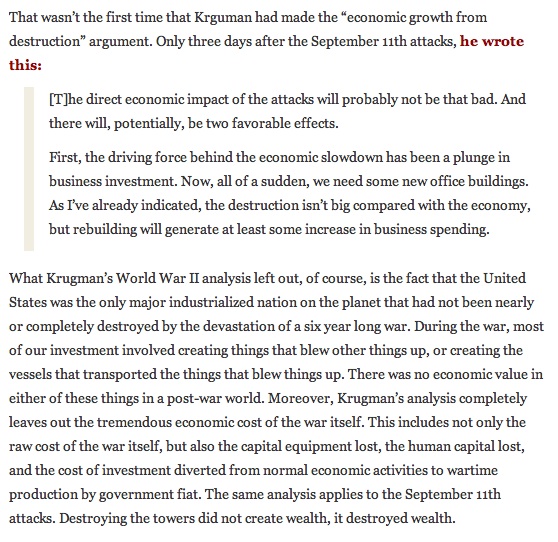 I'd say that that's not correct at all.

England's industrial might was not "destroyed" during the war, but England's economy suffered greatly in the postwar era.

The Soviets moved much of their manufacturing base to the Ural Mountains, well beyond the furthest reach of the Germans, and were making thousands of tanks and self-propelled guns as the war came to a close (while using our much-superior trucks, of course).

Plus, there was a little something called the GI Bill that never gets the credit that it deserved when it comes to telling the story of how America transformed itself after World War II. It educated a generation of men who in turn brought that education and life experience to the things they made in that postwar era. Spending money on that one government program was a tremendous return on investment for this country. Every time I hear about how government spending is wasteful, I think of the GI Bill and smile. How Ayn Rand must have fretted about sending all of those former GIs to college in the 1950s--the horror!

Destruction most certainly does create wealth. Destruction eliminates wasteful factories, forces smarter post-war planning, and allows for new manufacturing facilities to be created anew. Germany and Japan were utterly destroyed--the old orders were swept away, leaving new institutions to rise in their place. Their wealth now exceeds that of Russia, which is today the real historical victim of World War Ii precisely because the Soviet system survived the war. How'd you like to be a pension-starved Russian veteran of the Second World War, knowing full well that the Germans who knuckled under and gave up now live in wealth and security?

Krugman's Nobel is well deserved. Give him four more for all I care.
on August 15, 2011