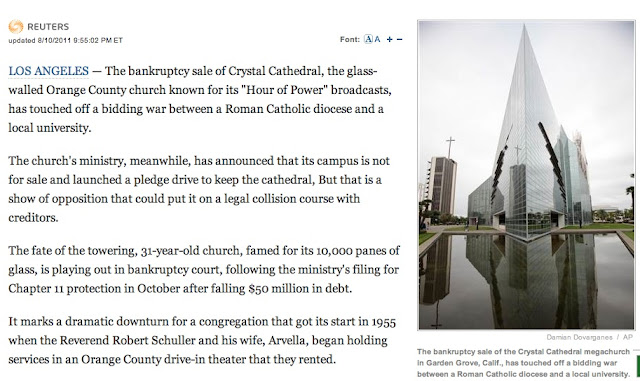 I would say that this is the end of that sort of religious nonsense for the congregation that Schuller built. His dysfunctional family has been split apart over how best to profit from the suckers who come through the turnstiles every Sunday and all that's left is a decaying property to sell off to whoever wants it.

In the 1980s, religion on television entered the stratosphere in this country. And when the various practitioners of this unique form of graft were revealed to be oversexed and a little crazy, Schuller did alright. He avoided being tarnished with the same brush that his competitors were smeared with. But the ticking time bomb for him turned out to be his greedy kids and their need to keep the money flowing.

Larry Flynt will probably put in a bid soon and talk about turning it into the great whorehouse of Orange County. Well, the OC is broke like the rest of the country, robbed by Republicans and left flailing and helpless by the side of the road. Flynt and Schuller have ridden out the culture wars and they should park their wheelchairs side by side and reminisce in front of the cameras together, trading jokes about how easy it was to build a financial empire out of exploiting the need for people to look at tasteless smut and phony piety, usually at the same time.