Time to Marginalize Our Military 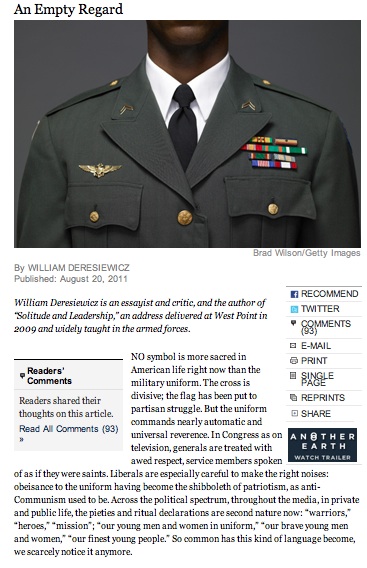 And it's time to blame the military for the failure to win in Iraq and Afghanistan. Our elites have crashed the sports car, run up the credit cards, and failed to accomplish anything in the last decade. A staggering amount of failure like this has to be pushed off onto the military, the poor, the middle class, or whoever looks like a serious culprit. Our elites couldn't be bothered to search their own empty souls.

That's what these sorts of articles are designed to do--assess proper context to a failing empire and the foreign policy tool that ate hundreds of billions of dollars and failed to spit out anything resembling victory. The hideously configured military uniform above shows the disregard for the military that appears so frequently in the media. The sheer ugliness of those medals and stripes and how it has been pinned to that uniform in the wrong manner illustrates the disconnect. Really? You couldn't find someone who knows how to put together a uniform in the proper way?

Do you know what is really to blame for America's failures right now? The fallacy of Harvard (or the Ivy League, if you will) as America's finest school or schools. Rampant cheating and incompetence is learned in the Ivy League, not cured by. As we speak, tens of thousands of Harvard-educated persons are engaged in destroying the American economy, wrecking our foreign policy, and driving our government into the ground. Whatever they've been taught, our stunningly incomptent elites are failing at everything they do. It's getting so you can't trust what you read anymore. I fear an anti-intellectualism is taking hold in the United States. I do not want that to happen. I want people to realize that plenty of smart, capable people come from institutions of higher learning all over the country. It's time to end this notion that you have to have an Ivy League pedigree (and thus, come from a "good family") in order to be considered for higher office.

Stupid is as stupid does, and, brother, nothing is more stupid than a Harvard-educated economist telling people that tax cuts create jobs or that they will welcome us with open arms when we incinerate their children and destroy their cities with precision guided bombs. Our elites are in love with drones; their escalating use is not because of some agenda on the part of the military, which understands the need for a human decision when it comes to a war fought with incredible technology. Our elites have ordered the use of drones because they kill whoever looks like an enemy on a video screen quickly and efficiently for less money.

Who has the ethical problem now?

This notion that a Senator or a President is somehow special because of their Harvard degree is something that should have crashed and burned a long time ago. Stocking the elite levels of our government with these shady characters has led us down the road to ruin. They can call themselves Democrats or Republicans, but if they're from Harvard, they bring a stunning level of incompetence to everything they do. How's that economy looking today?

These are the people who crafted the policies and ordered the military to go forth. These are the people who failed at economics, state craft, foreign policy, governing and business. These are the people who are to blame. The military is made up mainly of people from all walks of American life, representing a cross section of our country in ways that our Congress most emphatically does not. You practically have to be a millionaire to serve in Congress; you can count on being one when you finally walk away. The only way for a member of the military to walk away from their job and cash in is when they have three or four stars on their collar and a desire to forget everything they even learned about honor so that they can capitalize on their rank for profit. What's wrong with that picture?

Yes, there are Harvard men and women in the military. There are men and and women from the service academies as well, but the overall high quality of the people coming from American universities into uniform has helped give birth to the idea that eliminating the service academies wouldn't be a bad thing. The strength of our military stems from the fact that there are also men and women from virtually all of America's schools and universities, as well as men and women who never went to college. And, because of this diversity, the military more accurately reflects America back to us in ways that our Congress, which is stocked with elitists and an overwhelming number of Harvard-educated boobs, does not.

How can you blame the military for our decade of failure in the War on Terror? Which country did our military choose to invade? Who made deals with the devil (be he an Iraqi dictator or an Afghan potentate)? Who ordered our troops to build schools in order to appease the Nation Building acolytes? Who put politics above our national security time and time again in order to wrest control of Congress from one of the political parties?

The so-called intellectual elites ordered the military to undertake missions that were impossible to complete. How can you build any nation out of chaos and corruption using the force of arms? No one can explain this the people who are convinced, because of their educational pedigree, that they know better. We have civilian control of the military, but we don't have civilian accountability for misuse of the military.

When will people wake up and realize that maybe we ought to give the Presidency over to someone who graduated from Penn State or the University of Iowa or Oklahoma?
on August 22, 2011