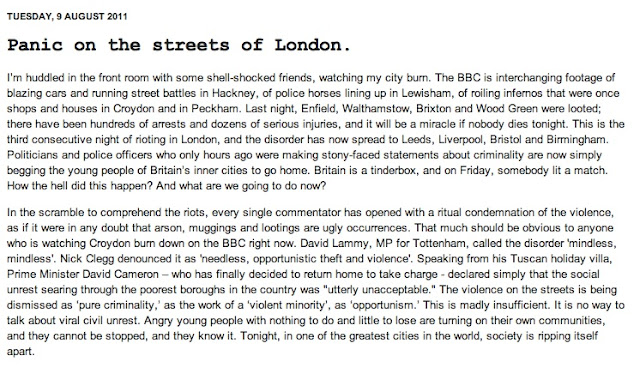 Surely rock and roll has something to do with all of this youth rebellion?

What phony issue is going to be manufactured to explain away the real reasons why disenfranchised people are resorting to violence? Will it be video games? Harry Potter books? The last Arctic Monkeys album?
When I was growing up, there were riots all over Great Britain. The sight of broken glass, disaffected youth, and policemen running is a motif that runs through a lot of the popular culture of Britain. We'd have these things in the United States, but too many people are on anti-depressants to really get the riots going. Well, that and there's no good music anymore. Everyone is fiddling with an Xbox now. How do you riot to the sounds of an Xbox game unless the point of the riot is to free Xbox games from captivity in an electronics store?
on August 09, 2011