The Wrong Side of History 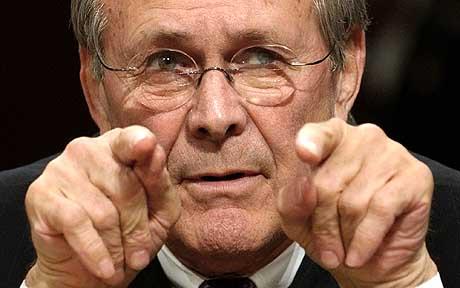 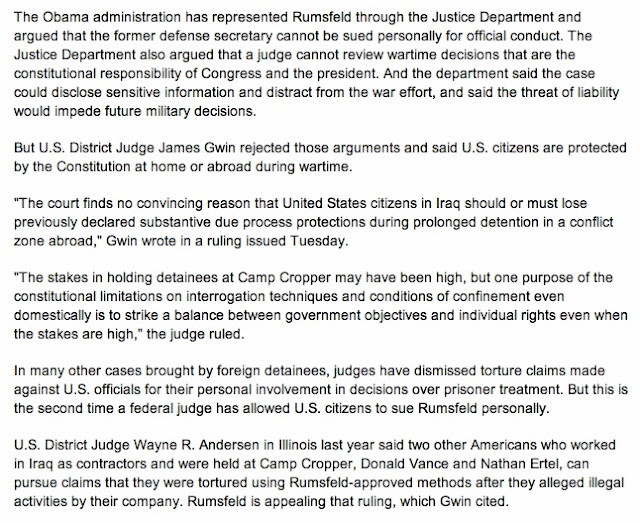 I think that the Obama Administration is dead wrong on this issue. Bending over backwards to defend former Defense Secretary Rumsfeld is less about Rumsfeld, himself, and more about protecting a Defense Secretary from any and all lawsuits, real or imagined, and holding on to the power that is inherent in the position. Allowing this lawsuit to go forward opens up a can of worms, in other words.

The situation with the War on Terror is vastly different, however. It may be the most illegally-waged war in American history, worse than the Spanish-American war, worse than any other situation in the history of American foreign policy (the Philippines and America's seemingly endless attempts at controlling the nation-states in the Caribbean and Latin America come to mind). It might be better policy to begin the cleansing now rather than wait a generation for it to begin.

And it will begin, one day. It will start with the simple act of jailing someone or having someone arraigned and it will begin to unravel one of the most sordid chapters in American history. Have we fought the War on Terror (an absurd notion if there ever was one) as honorably as we should have or as cravenly as our enemies wanted us to fight it?

Prosecuting Rumsfeld would be smart politics right now. President Obama needs to throw a bone to the base. Now would be a good time to start buttering them up for 2012.
on August 04, 2011