The Worst Boss in the World 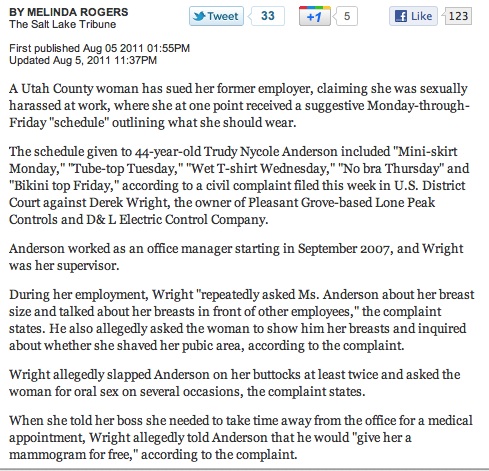 If these allegations are true, then Derek Wright is one of the stupidest men in America. If he did even half of these things, then he should be sued for everything he has, and then some. What a jackass.

Too many women are unable to file complaints about the harassment that they suffer in the workplace. The fact that this woman waited four years to file a lawsuit is not grounds to dismiss her claims at all--in fact, this sort of thing is very typical when a woman has a situation of economic desperation. In this case, the woman was a single mother at the time of the harassment and needed her job.

If you read further down (and it is sickening to read, trust me), you'll discover the fact that Wright tried to get this woman to sign a document that would "allow him to sexually harass her." In exchange for her signature, she would then be allowed to keep her job.

I hope to hell she can produce that document. If so, wow. What a piece of evidence.