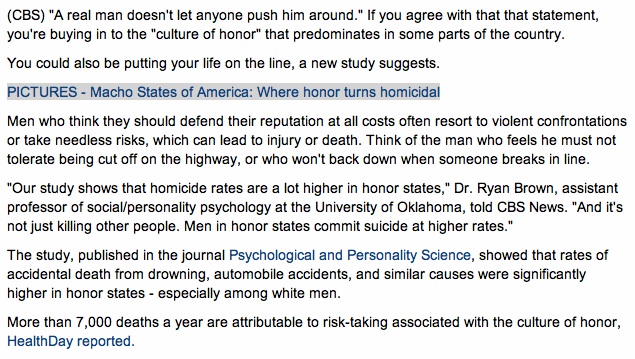 The language in this article is deliberately couched in terms that are meant to give little in the way of offense. But there's an easier way to explain what's going on here.

There is some imagined concept of "honor" in the United States. Well, there is this thing we like to call "you can't dis me" and that leads to violence and retribution. It leads to having grown men do incredibly stupid things in order to retaliate against some imagined or perceived slight. There are deliberate slights as well, and those are dealt with in much the same way as the manufactured slights--with violence and childish behavior.

What's missing is an appreciation for the rule of law. In a civil society, you don't settle disputes with guns or knives or fists--you settle it like a gentleman. And if you can't settle it with words, let the cops get off their Johnny Law asses and do something about it. The alternative is to try to settle things and then end up getting carted off by John Q. Law anyway. It's always better to involve them BEFORE you tear someone's shirt or bloody someone's nose.

By all means, defend yourself when someone gets out of hand. I have no problem with that. But what this article won't tell you is that South Carolina is, and pretty much always has been, the home of the violent, lawless and anti-American yokel who can't function in polite society. This is because South Carolina has never been dealt with properly in American history.

Nothing proves my point more than demonstrating that South Carolina is home to a male AND a female population that cannot function in a law and order society. 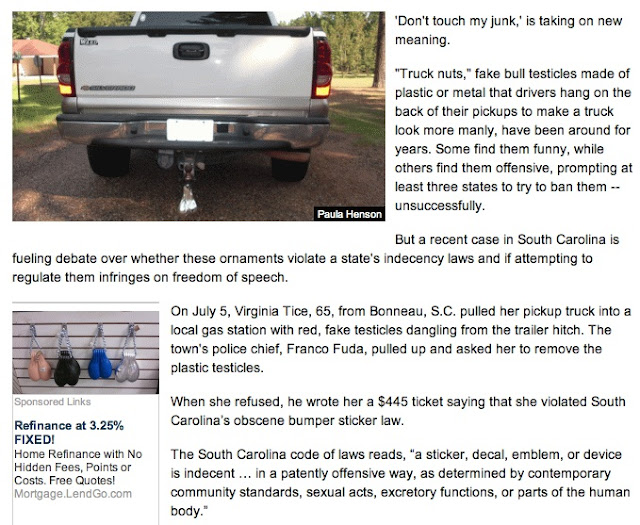 “He is nuts,” says Jay Bender, a lawyer and professor at the University of South Carolina, referring to Fuda and his interpretation of the law. Bender says although tasteless and stupid, they are not illegal, and adds, “Chief Fuda is abusing his arrest powers.” He says the statute is very clear about what material is obscene and “it doesn’t have anything to do with artificial bull testicles.”

Yes, you do have the right to hang plastic nuts from the back of your truck as a way of demonstrating a lack of taste, class and intelligence. But don't expect the rest of us not to laugh.