So Long to Whatever is Left of Your 401K 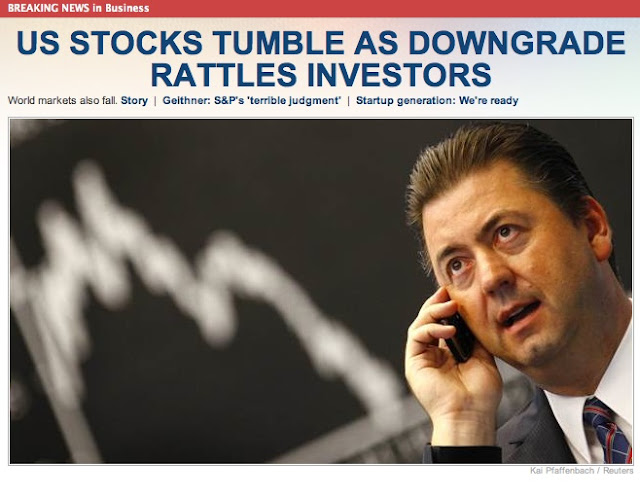 So many Americans have bailed on saving for retirement that I don't think this is such a huge thing right now. But there is a real danger that what is left of the retirement savings for millions of Americans could be wiped out in a major, prolonged stock drop.

I'm less concerned about large companies and more concerned about people who have dwindling retirement portfolios (yes, the two are intrinsically linked, but I think Bank of America can absorb a loss much easier than a family with one breadwinner who has $75,000 in a 401K or something to that effect).  There's very little left to give in this economy. The margin of error keeps shrinking--that margin between giving up food, medicine, or a payment on a credit card or the mortgage and the dwindling value of the weekly paycheck--and if it shrinks to the point where enough Americans are hurting, who are they going to blame?

I'm afraid they'll blame the political class. And if so, what does that mean? Does that mean a wave of amateurs will take over and run things? They certainly couldn't do any worse than the crew running things now. But that sentiment is a dangerous one. The American form of government is too complex to entrust to amateurs. What we need is reform, both in terms of how money is used to buy influence and in how the media is incapable of explaining the hard choices ahead. Ethics and information are the key elements of reform. We need hard and fast rules to deal with soft money and we need a population that is better informed.

Overwhelmingly, this crisis was triggered by the failure of the Republican Party to negotiate in good faith on the debt ceiling. The Democrats conceded a great deal, and governed with a great deal of pragmatism. There is none of this "both sides are to blame" nonsense being spread around here. If you haven't been paying attention, don't blame those of us who see the modern Republican Party as an extremist organization bent on destroying the American economy for political gain.
on August 08, 2011