Scenes From the Breakdown of America's Economy 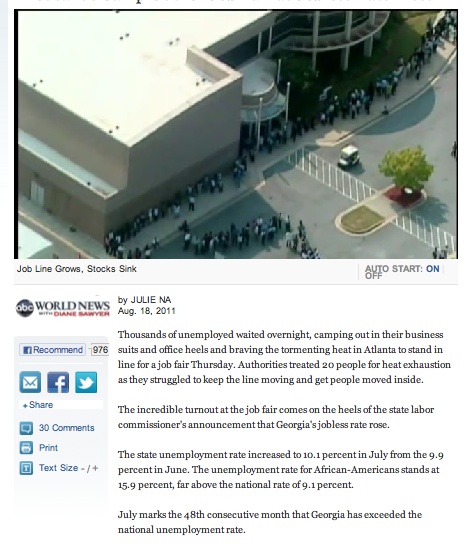 There are two Americas--the one where white people can find jobs and the one where African-Americans can find jobs. We comfort ourselves by putting the national unemployment rate at the artificially low level of 9 percent or so--for African-Americans nationwide it is much higher than that. Factor in all of the people who have given up and the under-employed, and your national unemployment level is at a critical level.

The solution isn't obvious, but it does involve government stimulus spending to finance job creation projects. Fixing our long-term unemployment issues will take a fundamental reorganization of America's economy. Should we go back to being a country that actually makes stuff? Or has that ship sailed?

I don't know. I do know one thing--President Obama is not going to get reelected if unemployment remains this high. The American people aren't going to vote for the continuation of misery even if they're being lied to by a major party candidate about what can be done to solve our problems. They'll vote for anyone who promises jobs.
on August 19, 2011