Of Course Michelle Bachmann is a Weird Diva 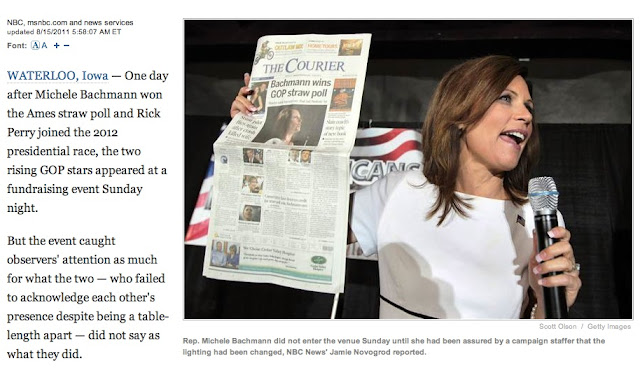 Fresh off of her win at the Ames, Iowa straw poll, Michelle Bachmann went to another part of Iowa and acted like "Madonna."

That's right, she acted like "Madonna," according to the media reports. She requested that the lights be turned up and made brighter so that her presented image would play better on television, I would imagine. How that equates to acting like "Madonna," I have no idea (did she have her backup dancers gyrate around rigidly-positioned phallic symbols?).

Suddenly, it's okay to use sexist language to describe a woman running for the Presidency, especially when that woman is a social conservative. I thought that we were going to deal with this ridiculous woman based on the issues. She is demonstrably wrong on every single issue on which she speaks. There's absolutely no need to tear her down based on her looks or whether her eyes roll back into her head when she fellates a corn dog. Just let her speak, then analyze what she is saying, and tell the truth about her positions and ideas. That's all you need to do. Michelle Bachmann discredits herself with her ideas and with her voting record.

If "Madonna" isn't a code word for "weird, washed-up, perverted, and liberal," I don't know what is. The media are off and running, and this woman will be eaten alive. Say hello to President Perry.
on August 15, 2011