Now's Not a Good Time to Talk About Infrastructure 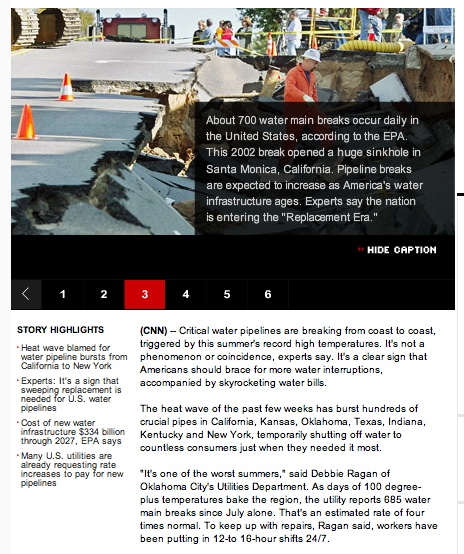 This is one of those times when reality hits home.

Reality dictates that, in order to upgrade and improve the nation's water infrastructure, someone is going to have to pay more in taxes or fees in order to make it happen. If people are going to talk about how government has to act like a family around the kitchen table (which it isn't, but oh well), then now is the moment when those same people sitting around the kitchen table have to find the money to have a new well dug or figure out how to afford running a pipe to the city's water supply. Are we ready for this kind of mature, serious discussion?

We just had a serious adult conversation in this country about cutting the deficit. And I don't remember anyone pointing out how foolish we were being by not spending money to improve our national infrastructure.

The people who still talk about how government should cut spending and cut taxes and let the private sector handle things have won the day. This is the accepted view of our national discourse--you're dead on arrival if you talk about raising taxes. But you're a serious thinker if you can quote Ayn Rand and deliver a magic pony who has a bundle of cheap water pipes tied to its back.

I feel bad for the communities involved. I hope that, at every level, they have adults in charge who can figure out how to raise the funds necessary to make improvements. I have a sneaky suspicion that they will have to deal with cranks and kooks who will make their decision making process harder than it already is, solely because the failed idea that tax cuts equals money! growth! success! has taken root in the American consciousness.