Making a Martyr Out of a Jackass 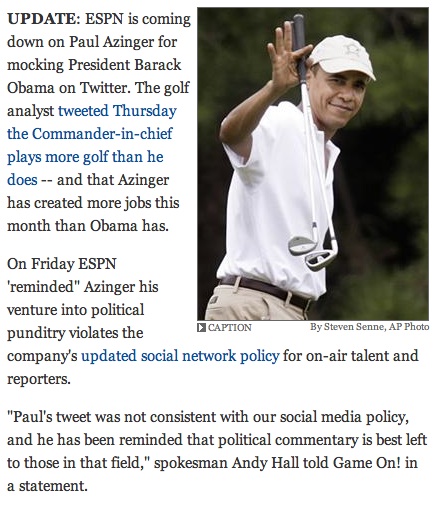 I'm sure that Paul Azinger thinks he's funny, but what he needs to do is start his own lame political blog.

What this sort of thing does is it creates phony martyrs for the anti-Obama crowd. Let Azinger tweet what he wants--let the marketplace of ideas render him a genius or a goof. If more people ventured into the political world and tried to comment on what is happening, I'm sure we'd have a more informed discourse.

I'm also sure that we'd know who the real jackasses are as well. Why would that be a bad thing?

Should President Obama be out playing golf? Probably not. Politicians who play golf open themselves up to all sorts of unfair criticisms. I think it shows a tin ear, politically, to publicly play golf when there's a war/hurricane/earthquake/alien invasion/unemployed puppy wrangler out there on the horizon.
on August 26, 2011