How the Media Will Destroy the Bachmann Candidacy 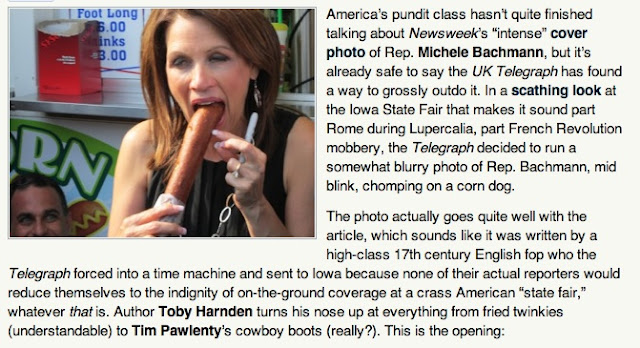 Not only is this awful, and sexist, but you have to consider two things when you see Michelle Bachmann being portrayed like this in the media: one, she's a woman, and all considerations for her gender are discarded in favor of a good laugh because the media doesn't really respect women, and, two, she's incredibly naive about how to deal with the national media and is entirely out of her depth when attempting to do so. She is not an establishment candidate, so complaining about her portrayal here is useless.

Really? You didn't think they would run the photo of you deep-throating a batter-covered hot dog? Who is advising Bachmann? When will they be fired? One of the most important things to remember about politics is that if you're going to put your candidate out there with the public doing stupid stuff, make sure there aren't any photos.

Next thing you know, she'll be going after the deep-fried Twinkies in entirely the wrong way.

The media will destroy Michelle Bachmann by making her seem weird and confused. This has nothing to do with her gender, although that makes it more joyful for the media.
on August 14, 2011