Governor Rick Perry Owned Stock in Movie Gallery (And Your Point Is?) 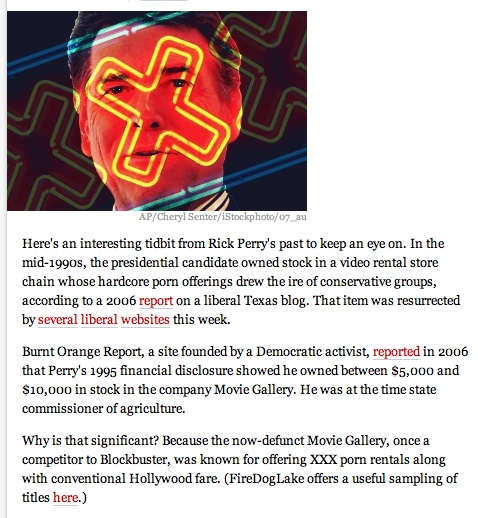 I think this would score Perry points with libertarians, but oh well.

Owning a very small amount of stock in a national video chain (circa 1995) doesn't amount to much of a scandal. Movie Gallery, for those who don't remember, was an also-ran in the effort to get you to spend money on renting videotapes. Basically, if Movie Gallery was on your way home or on your way to wherever, you might give them a try if you had too many late fees at Blockbuster. And one of the ways that Movie Gallery competed with Blockbuster was to offer a special section in the back where you could rent movies that Blockbuster was too prudish to carry.

Whenever a Christian dominationist or fundamentalist is found to be a hypocrite, I do tend to yawn. All of these people are hypocrites. If you haven't figured that out already, you're a babe in the woods. What are you going to "keep and eye on?" Do you really think that this is going to make him seize up in mid-sentence and quietly issue a statement withdrawing from the race for the Republican nomination? Do you really think he's going to roll up a newspaper and whack the guy who failed to cover his tracks on this?

Movie Gallery is out of business. I would think that it would be more of a story if Perry was a big shot on their corporate board. But, owning a fragment of their stock? So what? Am I supposed to be outraged or shocked because of what they rented to people when, in point of fact, there's nothing wrong with what they once rented to people in the first place? And that a modern politician had a paltry amount of their stock? Talk about a blog FAIL.

Governor Rick Perry is a walking, talking mess of wrongheadedness and incompetence. He would be easy to run against--just let him talk, fact check what he says, and hope the media covers it. The problem is, no one does substance anymore. But they do pay attention to sex.

And that graphic--how ridiculous is that? I'm not a fan of the guy, but slapping triple X across his face in red is a bit much.
on August 19, 2011