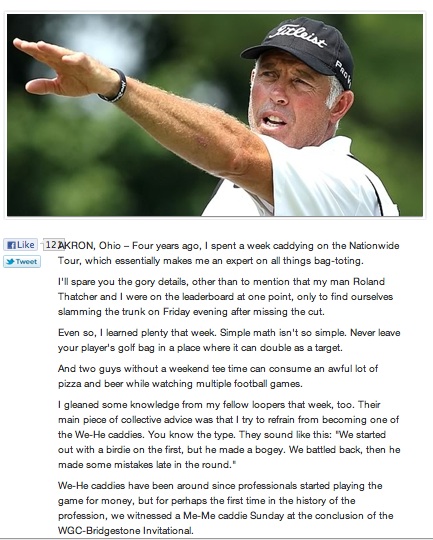 This post is a bit indulgent, but oh well. Let the man speak--he's carried golf clubs on his shoulder.

I think there's a bit more to the idea that Steve Williams was fired solely for caddying for someone else--there is a backstory there that would seem to indicate that Tiger Woods has had issues with his past and issues with the people who are supposed to be getting him back on his feet. I think that what is really going on here is that the people who have been telling Tiger Woods what to do in order to get back into shape to play competitive golf have been jettisoned so that Tiger can right the ship himself and not owe anyone anything. Tiger's not going anywhere anymore--except down. And he's not going to change that until he makes peace with himself and figures out how to play golf the way he used to play golf. But even if his mind gets right with it, his body probably won't. It's sad.

Anyone shocked that Williams would go out and savor the moment and take shots at Tiger hasn't been paying attention.
on August 08, 2011