Conservatives Run Away From the Hate Their Rhetoric Inspires 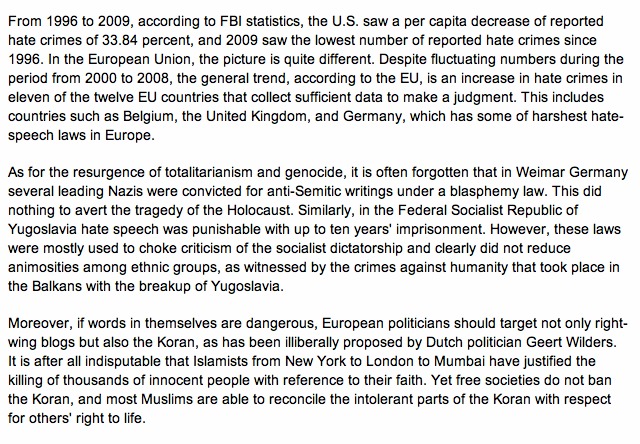 Apparently, we don't have a hate crime problem in this country and that guy from Norway? He's just crazy, man. And Europe? What's that? Does this sound like someone's lame attempt at misdirection? Because that's what it is--a feint designed to get people to stop trying to link fundamentalism and hate crimes and hate speech and actual criminal acts.

As soon as you can link someone to another person through their actions, you have something you can use to marginalize or discredit them. Linking the acts of Anders Breivik to extremist elements that rail against Muslims is the first step. It has already been proven that Breivik was a big fan of anti-Muslim and anti-immigrant rhetoric. And, from there, he went on to kill scores of people in order to make a name for himself as an anti-Muslim and anti-immigrant activist.

In order to keep people from making that common-sense connection, the misdirection play is used to try to influence the debate in the media. Unfortunately, the media is just not capable of looking at this piece and rejecting it outright. It's based on phony conclusions and manipulated data. How do I know? Well, let's look at a few facts.

This idea that hate crimes are decreasing is a tricky subject. It's based on this information: 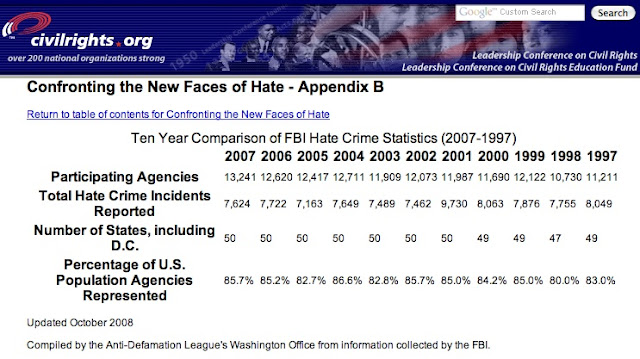 But, let's look at a disturbing trend in the other direction:

The State of Hate: Escalating Hate Violence Against Immigrants

The increase in hate crimes directed against Hispanics for the fourth consecutive year is particularly noteworthy and worrisome because the number of hate crimes committed against other racial, ethnic, and religious groups has over the same period shown either no increase or a decrease.

Now, let's consider this--the dismantling of the Bush Justice Department played a huge role in driving people away from the idea of reporting and prosecuting hate crimes in this country. You can see that, plain as day, in the first set of statistics. During the Clinton era, when we had a Justice Department with functioning Civil Rights section, hate crimes were reported and prosecuted.

When the Bush Administration dismantled the Federal Government's efforts to fight hate crimes and prosecute people who violated the Civil Rights of other Americans, the "reported" crimes went down. Do you think there was a connection between the intentional efforts of the Bush Administration to hire incompetents to work in the Civil Rights division and the overall decline in the quality of Civil Rights enforcement during the Bush era? Thankfully, the Obama Administration has reversed that trend. But it doesn't change the fact that dismantling protections for citizens was a hallmark of the Bush era. See here, here, and here.

The overall trend, if these statistics were valid, would have caused the number of incidents reported against immigrants to go down as well, right? Well, it went up for five years in a row, completely counter to all other trends, where the statistics hover in that range between 7,100 and 7,750 crimes per year. During this time, the number of mass-media commentators agitating against "illegal immigrantion" rose as well. Do you think this was by accident? No, it wasn't. Hate speech and incidents of hate crimes are linked in the American consciousness, and have been since the days of Jim Crow and lynchings. That's a fact. And add to that a disturbing growth in the numbers of white supremacists since the 2008 election of President Barack Obama.

What was the cause of this countering rise in hate crimes statistics against immigrants? Well, could it have been rhetoric? A Justice Department that was understaffed and basically turned its collective back on the needs of vulnerable Americans? Or is there something sinister at work here?

The FBI statistics probably don't reflect the "actual" number of hate crimes being committed in the U.S. and could be based entirely on flawed numbers. 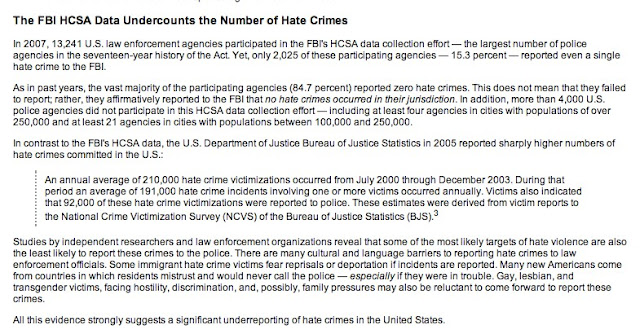 So, if this is true, then I vote for sinister.

How is it that we can accept, as normal, an average of over 7,000 hate crimes in the U.S., per year, and not see that as a dismal failure and a call to arms?

Anders Breivik is the perfect example of how hate and rhetoric can cross continents and borders. To say that, because the numbers in the U.S. aren't rising exponentially (and perhaps that is because there simply aren't enough people in the Justice Department going after people committing hate crimes) is to ignore the fact that borders don't matter anymore. Hate is multi-lingual and spread across numerous countries, all united behind a single xenophobic idea.

Using flawed, cherry-picked numbers to say that this is insignificant is the height of intellectual dishonesty.
on August 03, 2011