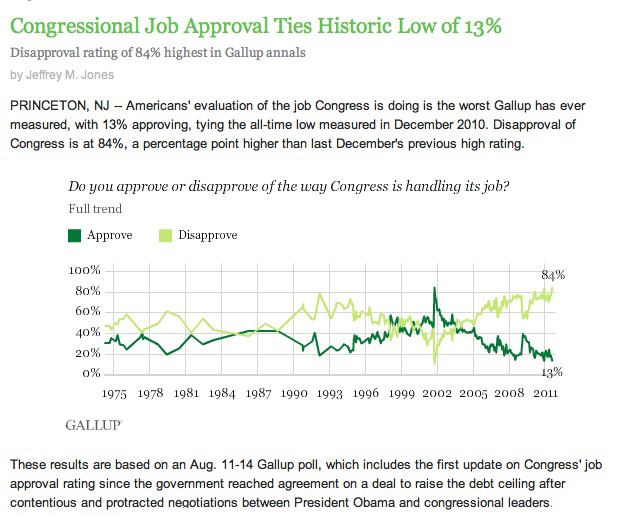 The governing class simply cannot govern. If you have been paying attention, this conclusion is not hard to escape. The failure of the governing elites has been staggering in recent years. Neither party is staffed with a stellar roster of smart legislators and capable statesmen. It is, instead, peopled with a disconnected mob that cannot stand up in front of the American people and govern them in the way we are accustomed. Our economy is in serious trouble but these people would rather go down with the ship, tax increases be damned.

It is worth noting that when Congressional job approval is low (and it has been historically low for both parties, except for that brief period in 2001-2002 when we were somewhat united as a country), the Congress itself doesn't change all that much. Do you have any idea how exhilarating it would be to see 250 or more Representatives thrown out of office? It would be Armageddon. And it would be a welcome change. These people are moral and ethical failures, and they haven't been doing the business of the people in ages.

Here's a good idea--if you have a degree from Harvard or Yale, you are invited to leave the country. You are automatically disqualified from being President or a Senator or a member of the House of Representatives. Silly? Of course. But it would help eliminate much of the governing class from electoral contention when it comes to perpetuating America's downfall.
on August 16, 2011