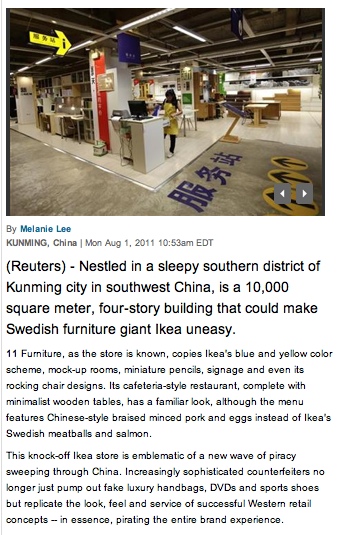 I don't know how you would battle this sort of thing in the short term. Do you expect the law to take care of your brand on the international stage? I would think that there would have to be some recourse through international trade agreements and through international commerce rules that would help prevent the Chinese (and others, let's be fair) from doing this sort of thing. To make any headway, it would be a long battle of negotiating and holding China's business interests accountable. Would that sort of thing make it difficult for IKEA to continue to build up its business interests China as a legitimate counterweight to the knockoff IKEA? And, yes, there are IKEA stores in China.

The mechanism would be difficult to construct. You'd have to convince the Chinese government to do something about this company, and you'd have to do it in a way that would respect China's right to police itself and deal with "brand piracy." The threat of some form of economic sanction would have to have some bite to it--something that would make the Chinese government protect itself and have the motivation to shut down a company engaged in these practices.

Treating China fairly and honestly--but like an equal--would go a long ways towards shutting down this brand piracy phenomenon before it really starts to take hold. The old fashioned idea that the real thing is better would also have to take hold in China. Unfortunately, IKEA has branded itself as the cheap alternative to traditional furniture stores. What if the knockoff IKEA has a better business plan and has better ideas? What do you do then?
on August 02, 2011