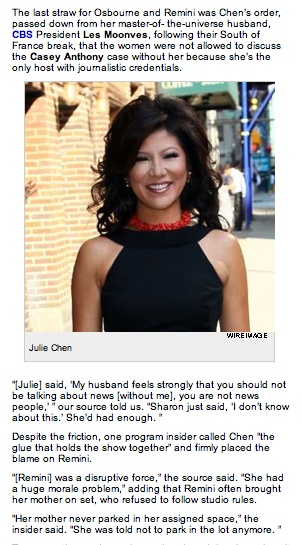 "Her mother never parked in her assigned space."

Everyone is gunning for Julie Chen because of who her husband is. Someone who has been told to protect Chen has let it leak out that Leah Remini is the problem. Well, who cares? This is all designed to influence the weak-minded people who believe this sort of nonsense. There are probably divided camps out there, and they are eyeing each other like animals. What really went on is probably too boring for words.

It sounds like a television program went out there with a failed format and with people who didn't generate any interest. Translation--they paid too much for the talent and now they have to flush them out in order to achieve profitability. This is why the underlings and lackeys are now trying to angle for influence and control and appease Chen. The wife of a network president should not be allowed to have a show. There are too many opportunities for favoritism and for lawsuits.

It's very simple--if someone is doing something they are not supposed to do, you tow their car, set it on fire, and laugh hysterically in their face if they cannot park it where they are supposed to park it. There is more to this story than they are letting on.
on August 16, 2011