Are People Tired of Being Manipulated Yet? 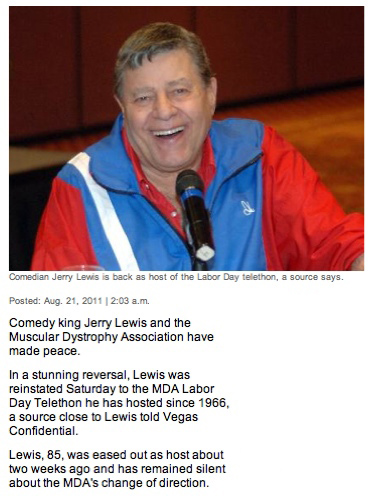 Does this seem fishy to you?

It seems fishy to me. I refuse to believe that there is anything about this that is genuine because it all feels like something that a savvy promoter would come up with. And I think a promoter would come up with this because people are on to other things and I don't know that there is going to be a huge national outpouring of donations in this terrible economy (although, in bad times, generous people do give of themselves, and usually, those are poor people).

I don't think I'm wrong when I say that the MDA Labor Day Telethon was a big deal in the 1980s, especially when there was nothing on except for what ABC, CBS, and NBC could come up with. They took the respectability of old Hollywood and used it to manipulate people into giving money to these people. I'm not saying that the cause wasn't a good one, but it was one cause among many. Why did this one cause get more attention and more emotional support than any other? Why did this disease get to have its own telethon while the others had to beg for money and get second-class status?

Everything that has happened here strikes me as being planned and preordained to drum up interest in something that now has to compete with 1,000 channels and the Internet. That's what feels so manipulative about it.
on August 21, 2011