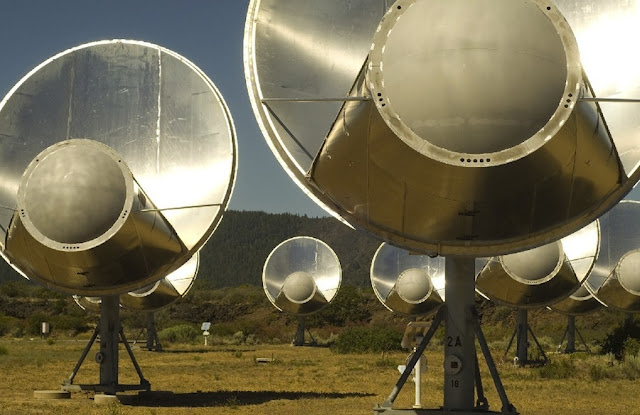 This is a shame:

Lacking the money to pay its operating expenses, Mountain View's SETI Institute has pulled the plug on the renowned Allen Telescope Array, a field of radio dishes that scan the skies for signals from extraterrestrial civilizations.

In an April 22 letter to donors, SETI Institute CEO Tom Pierson said that last week the array was put into "hibernation," safe but nonfunctioning, because of inadequate government support.

The timing couldn't be worse, say SETI scientists. After millenniums of musings, this spring astronomers announced that 1,235 new possible planets had been observed by Kepler, a telescope on a space satellite. They predict that dozens of these planets will be Earth-sized -- and some will be in the "habitable zone," where the temperatures are just right for liquid water, a prerequisite of life as we know it.

Does it matter if they hear what they're listening for? No. The effort of listening informs the searches that haven't even begun.