Paul Krugman Will Brook No Bromance With You 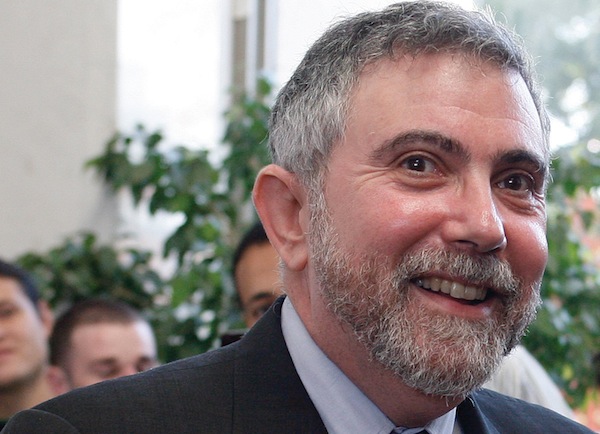 I think this is just a media attempt at finding a way to take a smart man in public life and make him look weird on purpose:

Paul Krugman is a Nobel-Prize winning economist and world-famous blogger. According to a new article, you can add self-described loner to that list as well.

In a New York magazine profile, "What's Left of the Left," Krugman, author of the New York Times'highly-influential blog, "The Conscience of a Liberal", is described as a "lonely man" that had trouble naming a single friend that could be interviewed to provide the author with a better understanding of one of America's most famous liberals.

Asked to describe himself, Krugman, who allegedly avoids eye contact with colleagues in the elevator, quickly points to his own solitary characteristics: “Loner. Ordinarily shy. Shy with individuals.”

Paul Krugman is married. Married men who avoid bromances are easy to understand. They prefer their wives to jackasses. I'm a fan boy of that sort of thinking.

Sometimes, when you're on the way to the bathroom, you can choose to avoid making eye contact with the idiots you work with. I can totally get that, too. Yes, we said "hello" to each other this morning. It's now 11 AM. Let's give each other some space, okay? That's not to say that one always works with idiots--really, we're talking a subjective thing here. Mr. Krugman works for a newspaper. Idiots thus abound.
on April 25, 2011