Has Shaun the Sheep Been Hijacked by Farmerama?

I took a screenshot of this ad (don't click on it--there is no operating link) and I was bothered by how similar the "sheep" in the ad looks to Shaun the Sheep:

Here's what Shaun the Sheep looks like, by the way: 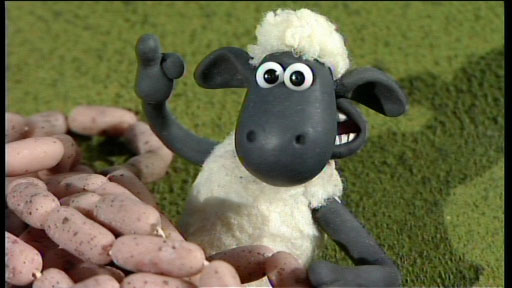 So, do I do nothing? Or do I get involved? (sounds of trumpets)

I sent this to Aardman:

I just took a screenshot of an ad that appears on one of my blogs.

This shot looks like a dead-ringer for Shaun the Sheep, one of your main characters.

Is this sanctioned? Does "Farmerama" have the rights to use the likeness of Shaun the Sheep?

If this image is not sanctioned, I would like to ban Farmerama ads from my website for stealing your character's image.

Hilariously, I'll probably get sued by everyone involved and lose all my blogs. Yay! No matter. Around our house, Shaun the Sheep is king. And we're starting to get the new Timmy Time DVDs as well. It's possible the image skews more towards Timmy (the baby sheep character that has been spun-off for his own animated series) but I don't know. Either way, the image really looks like a copyright infringement. I'm not perfect, but I don't think that sort of thing should go unnoticed.

Like I said, it's probably nothing. But, I got involved! (sounds of trumpets)