Stand When You Work 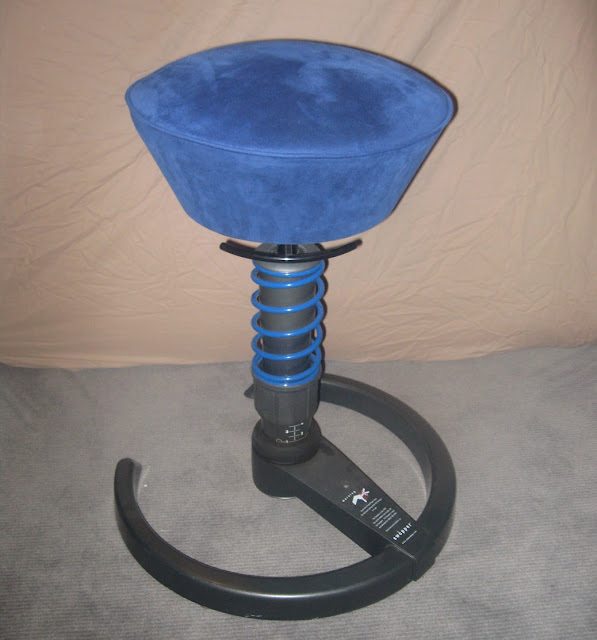 Sitting down is really not good for you:

In a 2005 article in Science magazine, James A. Levine, an obesity specialist at the Mayo Clinic, pinpointed why, despite similar diets, some people are fat and others aren't. "We found that people with obesity have a natural predisposition to be attracted to the chair, and that's true even after obese people lose weight," he says. "What fascinates me is that humans evolved over 1.5 million years entirely on the ability to walk and move. And literally 150 years ago, 90% of human endeavor was still agricultural. In a tiny speck of time we've become chair-sentenced," Levine says.

Hamilton, like many sitting researchers, doesn't own an office chair. "If you're standing around and puttering, you recruit specialized muscles designed for postural support that never tire," he says. "They're unique in that the nervous system recruits them for low-intensity activity and they're very rich in enzymes." One enzyme, lipoprotein lipase, grabs fat and cholesterol from the blood, burning the fat into energy while shifting the cholesterol from LDL (the bad kind) to HDL (the healthy kind). When you sit, the muscles are relaxed, and enzyme activity drops by 90% to 95%, leaving fat to camp out in the bloodstream. Within a couple hours of sitting, healthy cholesterol plummets by 20%.

The data back him up. Older people who move around have half the mortality rate of their peers. Frequent TV and Web surfers (sitters) have higher rates of hypertension, obesity, high blood triglycerides, low HDL cholesterol, and high blood sugar, regardless of weight. Lean people, on average, stand for two hours longer than their counterparts.

The chair you're sitting in now is likely contributing to the problem. "Short of sitting on a spike, you can't do much worse than a standard office chair," says Galen Cranz, a professor at the University of California at Berkeley. She explains that the spine wasn't meant to stay for long periods in a seated position. Generally speaking, the slight S shape of the spine serves us well. "If you think about a heavy weight on a C or S, which is going to collapse more easily? The C," she says. But when you sit, the lower lumbar curve collapses, turning the spine's natural S-shape into a C, hampering the abdominal and back musculature that support the body. The body is left to slouch, and the lateral and oblique muscles grow weak and unable to support it.

This, in turn, causes problems with other parts of the body. "When you're standing, you're bearing weight through the hips, knees, and ankles," says Dr. Andrew C, Hecht, co-chief of spinal surgery at Mount Sinai Medical Center. "When you're sitting, you're bearing all that weight through the pelvis and spine, and it puts the highest pressure on your back discs. Looking at MRIs, even sitting with perfect posture causes serious pressure on your back."

Much of the perception about what makes for healthy and comfortable sitting has come from the chair industry, which in the 1960s and '70s started to address widespread complaints of back pain from workers. A chief cause of the problem, companies publicized, was a lack of lumbar support. But lumbar support doesn't actually help your spine. "You cannot design your way around this problem," says Cranz. "But the idea of lumbar support has become so embedded in people's conception of comfort, not their actual experience on chairs. We are, in a sense, locked into it."

In the past three decades the U.S. swivel chair has tripled into a more than $3 billion market served by more than 100 companies. Unsurprisingly, America's best-selling chair has made a fetish of lumbar support. The basic Aeron, by Herman Miller, costs around $700, and many office workers swear by them. There are also researchers who doubt them. "The Aeron is far too low," says Dr. A.C. Mandal, a Danish doctor who was among the first to raise flags about sitting 50 years ago. "I visited Herman Miller a few years ago, and they did understand. It should have much more height adjustment, and you should be able to move more. But as long as they sell enormous numbers, they don't want to change it." Don Chadwick, the co-designer of the Aeron, says he wasn't hired to design the ideal product for an eight-hour-workday; he was hired to update Herman Miller's previous best-seller. "We were given a brief and basically told to design the next-generation office chair," he says.

The best sitting alternative is perching—a half-standing position at barstool height that keeps weight on the legs and leaves the S-curve intact. Chair alternatives include the Swopper, a hybrid stool seat and the funky, high HAG Capisco chair. Standing desks and chaise longues are good options. Ball chairs, which bounce your spine into a C-shape, are not. The biggest obstacle to healthy sitting may be ourselves. Says Jackie Maze, the vice-president for marketing at Keilhauer: "Most customers still want chairs that look like chairs."

Now, why aren't there more Swoppers out there?