Studded Tires Are Bad For Your Health? 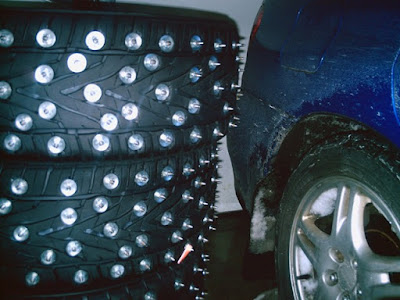 Drivers who hit the road in winter with studded tires may be ruining more than just the pavement beneath their cars. They also could be harming their hearts and lungs.

Microscopic road debris kicked up as the tires' spiky metal posts meet the asphalt could pose risks to health, not only for drivers, but also for the people living near highways, Swedish scientists suggest.

Researchers collected airborne particles generated as studded tires rolled over a road simulator at about 40 miles an hour, according to a study published in the latest issue of the journal Chemical Research in Toxicology. They then added this dust to a dish containing human white blood cells, similar to the ones that line the lungs.

By extension, isn't everything thus harmful?
Anything that creates road debris could pose a threat to human respiratory systems. That would mean that regular tires are also harmful, just not to the same degree as the spiked tires. Anything that comes into any sort of contact with a road surface could kick up road debris. What are the comparisons between studded tires and no studded tires? Or is this just an effort to ban the tires?
Never used them. Never had to.