Monument to the Peasants 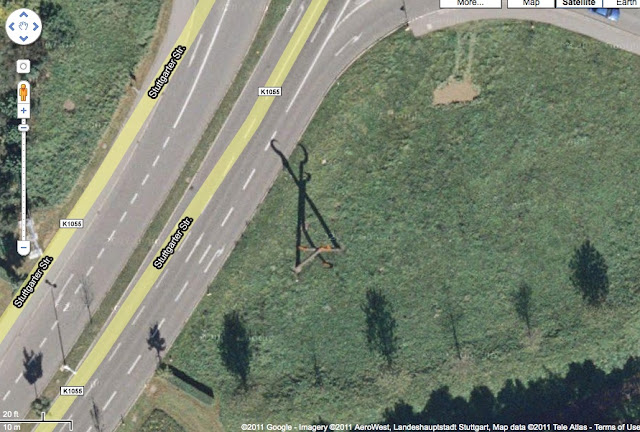 A monument to the peasants, Boblingen, Germany. Image from Google Maps.

As of today, however, this monument no longer exists.

What remains are three circular stumps, and very little else. It would appear that the monument was removed to make the sight area of a German speed camera clearer. I don't know the particulars, but oh well.

This monument paid tribute to The Peasants Rebellion:

The Peasants' War (Deutscher Bauernkrieg in German, literally the German Peasants' War) was a popular revolt that took place in Europe during 1524–1525. It consisted, like the preceding Bundschuh movement and the Hussite Wars, of a series of both economic and religious revolts in which peasants, townsfolk and nobles all participated.

At its height in the spring and summer of 1525, the conflict, which occurred mostly in the southern, western and central areas of what is now modern Germany plus areas in neighbouring Alsace and modern Switzerland and Austria, involved an estimated 300,000 peasant rebels: contemporary estimates put the dead at 100,000. It was Europe's largest and most widespread popular uprising prior to the French Revolution of 1789.

Germany's peasants and plebeians compiled lists of articles outlining their complaints. The famous 12 Articles of the Black Forest were ultimately adopted as the definitive set of grievances. The articles' statement of social, political and economic grievances in the increasingly popular Protestant movement unified the population in the massive uprising that broke out first in Lower Swabia in 1524, then quickly spread to other parts of Germany.